Ciankyle continues to do Calvey and Cluskey proud 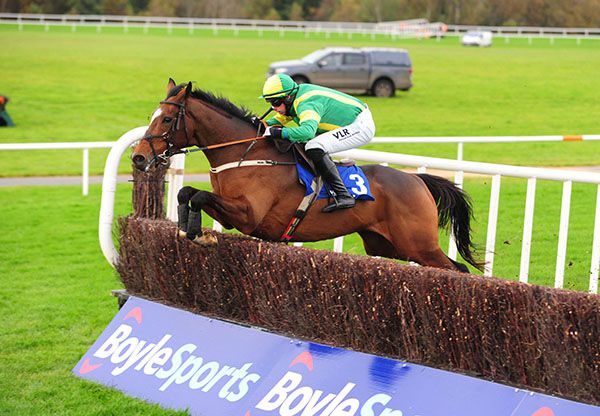 “The horse is nine but he’s coming into himself now and he’s done us proud. I think there’s a good one in him,” said Peter Cluskey yesterday after Ciankyle bounced back from a Clonmel fall to land the Brewin Dolphin Handicap Chase.

The well-backed 100/30 favourite had won at this venue in a handicap hurdle in September, before a Powerstown Park tumble when still holding prospects at the second last fence.

With Paddy Kennedy in the plate on this occasion, the Mountain High gelding attained a sixth career success, and he’s been a profitable horse to follow all told, with most of his victories achieved at double figure prices.

Here the Hugh Calvey owned and bred County Dublin-trained gelding was always to the fore before registering a two and a half length win.

Le Hachette took the silver medal, one of three runner-ups saddled by John Ryan on the afternoon.

“Mark (Bolger) will be disappointed to miss out as he’s ridden him to all his wins up to now,” added Cluskey.

“He could have even missed two winners here today and I think it’s an old injury that’s keeping him out. He tells me he’ll be back in action soon."

A Girl Like Me was a winning spare for Kevin Sexton in the Galway Handicap Hurdle and gave the jockey a brace of winners in Ballybrit.

Dermot Weld and Oisin Orr doubled up at Leopardstown through Amma Grace in the Listed Trigo Stakes.

Lipizzaner relished the testing conditions to score a convincing victory in the Listed vertem.co.uk Doncaster Stakes.