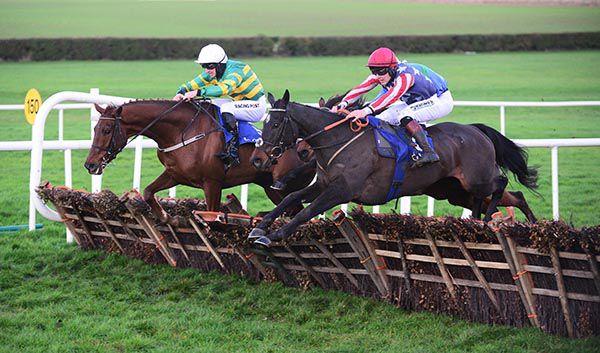 There was a fifth County Tipperary trained winner in succession at Clonmel today when 40/1 chance Pepite De Belle sprung a surprise for Cashel’s Sam Curling in the concluding Next Meeting Thursday January 7th (Q.R.) Maiden Hurdle.

Subsequent Cheltenham and Grade One hero Saint Roi was famously beaten into fifth, when at odds of ‘threes on’ he was led home by a 25/1 chance in this contest a year ago.

Saint Roi’s connections had another French-import, Capodanno, doing battle for them on this occasion, but that 6/4 shot had to settle for third, a length and three parts and the same behind the Jordan Gainford-ridden Pepite De Belle.

Dual bumper scorer Eilise’s A Lady finished second. The former Paul O’Flynn and Dan Skelton winner wasn’t for beating on this occasion though.

The Great Pretender mare raced in mid-division early, and she was closer in fifth at halfway.

She challenged entering the straight, and ridden to dispute before two out, the five-year-old asserted after the last, keeping on well in the closing stages to confirm success.

"She was going to be third to Appreciate It the last day and made a bad mistake and had previously ran well in a bumper at Downpatrick,” said Curling.

"It is great to get one for Pat Fennessy who has three or four fillies with me and Jordan is very good and you'll be hearing a lot more of him - he is great value for the 7lbs claim.

"I'm not sure what the plan is but she'll go for something over Christmas."

Mr J.W. O'Neill, rider of Dalileo trained by Ronald O'Neill, reported to the Clerk of Scales that his mount lost both front shoes in running.