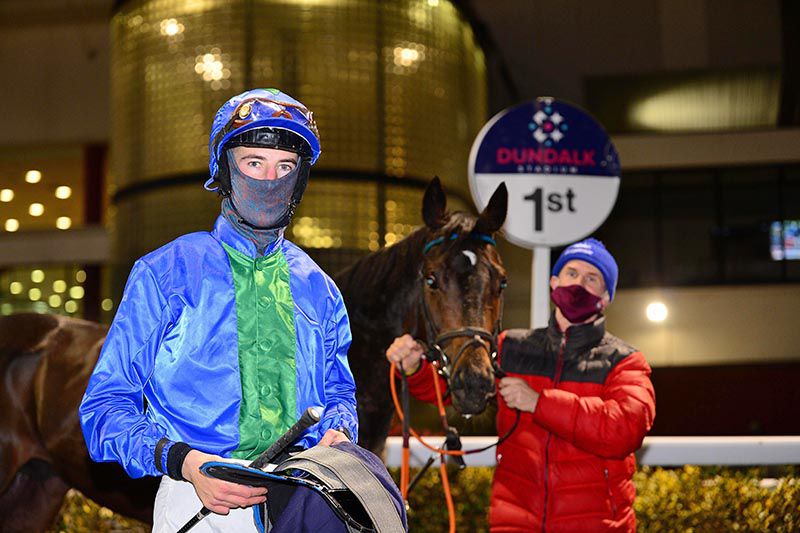 John Oxx, who recently announced his impending retirement, got on the score-sheet in division one of the 45 to 65 HOLLYWOODBETS Handicap with Regal Eagle.

Switched to a visor, having worn blinkers before, Regal Eagle looked like he might win by more than a short head, when edging ahead in the final furlong in this fourth event at Dundalk.

However Tyrconnell was tough and rallied to the cause well, with three and three parts of a length back to Never Rains in third.

“In the circumstances that is extra special. We don't have many left to fire,” said winning jockey Ross Coakley.

“He's one of the last few and it's the dream result that he's gone out and done the business for the boss.

“We left the tongue-tie off him today as on his last run he broke very slow and I felt he resented it.

“We also switched from blinkers to visors just to take a step down. He jumped really well today and travelled well the whole way around.

“I was a little worried as I travelled well into the straight but when I rolled out for go forward I felt there were a couple of my inside that had committed early and I had a few lengths to make up.

“He did well to win because he got lonely the last furlong and rolled in towards the inside.

“He only started running this year so is probably a slow learner and a big babyish.

“I think he's due to go to the sales now. It's nice he's got a bracket going into it and I've no doubt that whoever picks him up will have plenty of sport.”

S. Foley, rider of Tribal Path trained by Damian Joseph English, reported to the Clerk of the Scales that his mount lost its action in the straight.

R. Coakley, rider of Regal Eagle trained by John M. Oxx, reported to the Clerk of the Scales that his mount lugged left in the straight.

The Irish Horseracing Regulatory Board Veterinary Officer examined Tribal Path, trained by Damian Joseph English, at the request of the Stewards and reported the animal to be post race normal.