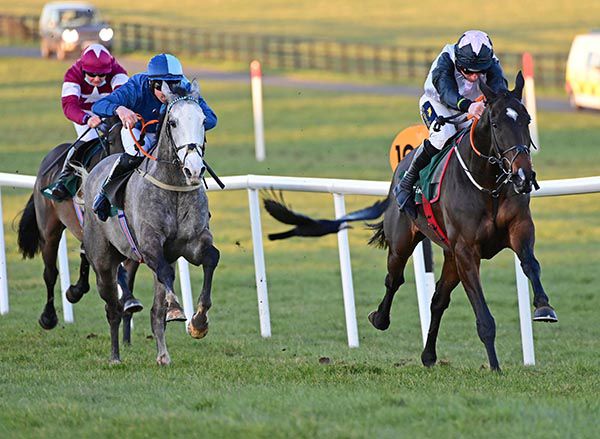 The Gordon Elliott-trained gelding was sent to post a 1/2 shot to follow up on his wide margin success at Fairyhouse in mid-January.

Jamie Codd bounced out in front on the hotpot but he relinquished the lead before halfway as Highland Charge went to the front under Pat Taaffe after his saddle slipped.

Gerri Colombe picked up the running again early in the straight and found plenty for Codd in the closing stages to hold the charge of Walter Grey.

The winner, who cost £240,000 after scoring on his sole point-to-point outing, was pulling away again at the line to post a three-and-three-quarter length victory.

Codd said afterwards:- “I really like him. Any horse that wins a bumper by 24 lengths first time must be good and the ground is just perfect for him as it’s not gone too dry yet.

“He’s going to be a lovely horse next year for his owners and we’re just delighted with that.

“Next year is the year for him when he goes jumping and anything he does this year is a bonus. He’s won two bumpers now and is exciting.”

The winner was trimmed into 12/1 (from 14/1) by Paddy Power for the Cheltenham bumper.