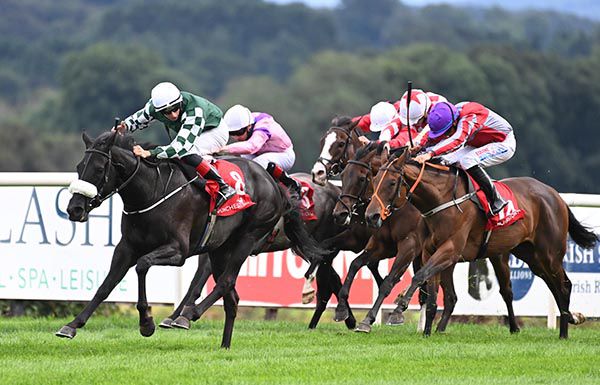 My Holy Fox completed a double on the card for Jessica Harrington, as she took the feature at Punchestown, the Irish Stallion Farms EBF Fillies Handicap.

A full-sister to dual Group 2 winner Banimpire, the three-year-old was making her debut in handicap company this afternoon, having won her maiden at the Curragh last month.

Upped in trip to a mile and one, she was sent off an 8/1 chance under Conor Hoban in the colours of owner Zhang Yuesheng.

Settled in mid-division, she was pushed along and took closer order approaching the straight, hitting the front with just over a furlong to race.

She was ridden and extended her advantage inside the final furlong, coming a comfortable two lengths to the good.

Star Image finished second at 20/1 under Niall McCullagh for Tom Mullins, while Shahaada (10/3jfav) was another half-a-length back in third, with Chris Hayes aboard this one for Kevin Prendergast.

Flagged was the other joint-favourite and she finished a disappointing tenth under Colin Keane.

Harrington, who took the opener with Alizarine, said: "She did it very well. She's a beautifully bred filly and when we won the maiden in the Curragh we thought it was job done.

"On her work we thought maybe she had a nice mark. For her fourth run to do what she did from a wide draw, she was very professional about it and we're delighted.

"I'd love to sneak a bit of black-type for her but she is going to be covered southern hemisphere time. That is the plan at the moment but it might get changed, I don't know.

"Once she was made a winner that is what they decided to do but she's won two now and we'll see what the owners want to do."

M.A. Gallagher, rider of Kush trained by Ross O'Sullivan, reported to the Clerk of Scales that his mount ran too free during this race.

Keith Henry Clarke, trainer of Harriet's Force, reported to the Clerk of Scales that his charge scoped dirty post race.