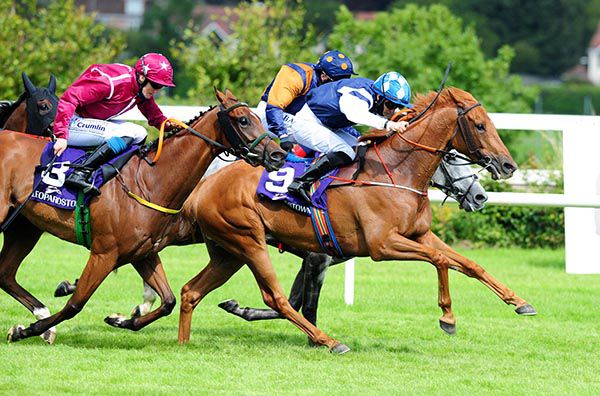 Placed nine times since his last win, the Paddy Hassett trained six-year-old was sent off the 4/1 favourite this afternoon.

Having raced mainly in third under Danny Sheehy, the chestnut was pushed along from early in the straight and soon came with his challenge.

Ridden inside the final furlong he had to battle gamely to see off all challengers, as he edged to the front in the closing stages, going on to prevail by a neck.

L'un Deux Trois (10/1) finished second under Chris Hayes for Oliver McKiernan, while Conor Hogan (6/1) was another neck back in third.

Blackstone Cliff (5/1), who was squeezed for room close home, was another three parts of a length back in fourth.

Liam McAteer, part of the winning Parkview Bloodstock Syndicate, said: "He's a tough little horse. He'd won two and was placed a good few times. He got into a bit of a battle here last week and finished third.

"He went up five pounds for finishing second previously at Ballinrobe which we thought was a bit harsh but he did it well today and battled to the line. Danny gave him a great ride.

"He was going away at the finish and was the best horse in the race.

"It's great for Paddy Hassett who trains him and is a vet in Quin, County Clare. That's his second winner in a couple of weeks as Our Nancy, who is named after my granddaughter, won at Ballinrobe.

"He'll run over hurdles as well and will go to Listowel."

* The Stewards enquired into possible interference inside the final 200 yards involving Conor Hogan, ridden by W.J. Lee, placed third, Happy Company, ridden by D.E. Sheehy, placed first and Blackstone Cliff, ridden by R.P. Cleary, placed fourth, where it appeared that Blackstone Cliff ran short of room when racing between the other two named horses. Evidence was heard from the riders concerned. Having viewed the recording of the race and considered the evidence, the Stewards made no alteration to the Judges placings. They did, however, consider that the interference was caused by D. E. Sheehy riding carelessly this being a breach of Rule 214. Having taken his previous record into consideration and allowing for some mitigating circumstances, the Stewards cautioned D.E. Sheehy on this occasion.

* S.M. Crosse, rider of Chico One trained by Luke Comer, reported to the Clerk of Scales that his mount reared up when leaving the starting stalls and lost considerable ground.

Hightimeyouwon picks up well in Cork

Dermot Weld's Hightimeyouwon took the honours at 17/2 in the seven-furlong handicap at Cork.

Fiscal Rules the roost in Cork

Scholastic gained a deserved success over jumps when running out a convincing winner of the EMS Copiers 3-Y-O Maiden Hurdle at Punchestown.