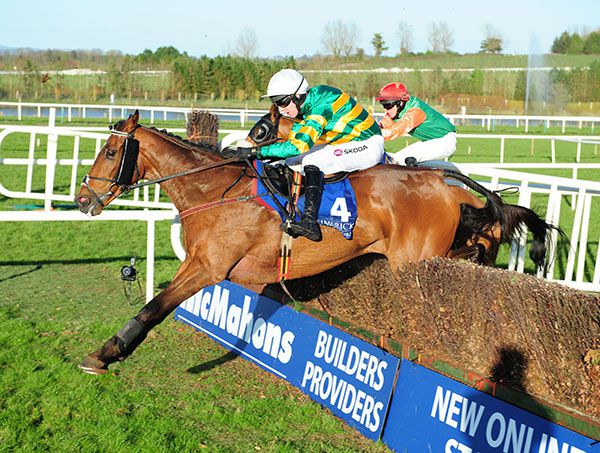 With cheek-pieces on for the first time Concordin secured his first win since the end of 2016 when triumphing in the www.limerickraces.ie Handicap Chase.

Coming here off the back of a Thurles fall, the J P McManus-owned and Robert Tyner-trained ten-year-old proved too strong for Take The Cash from the last to win by three parts of a length.

The principals drew on by twenty nine lengths from third home Bilbo Bagins.

Of course McManus today said he wants to bring the Ryder Cup back to Ireland, with Adare Manor to bid for the 2026 golfing spectacular.

Mary Tyner (wife of the winning trainer) said: "He jumped great for Mark and seemed to enjoy it. Hopefully we can find something similar for him. He was a bit unlucky at Thurles the last day where he got a bad fall at the last."

The Irish Horseracing Regulatory Board Veterinary Officer reported to the Stewards that Positive Approach trained by John J. Walsh was noted to have pulled a left fore shoe post race.

The Irish Horseracing Regulatory Board Veterinary Officer examined Ballela Boy, trained by Gordon Elliott, at the request of the Stewards and reported the animal to be post race normal.

C. Brassil, rider of Draycott Place trained by John Patrick Ryan, reported to the Clerk of Scales that his mount jumped carefully today when returning to fences and tired in the ground..

C.D. Meehan, rider of Ballela Boy trained by Gordon Elliott, reported to the Clerk of Scales that his mount lost his action and was pulled up.

P.T. Enright, rider of Positive Approach trained by John J. Walsh, reported to the Clerk of Scales that his mount jumped poorly during this race.