Convara toughs it out from front 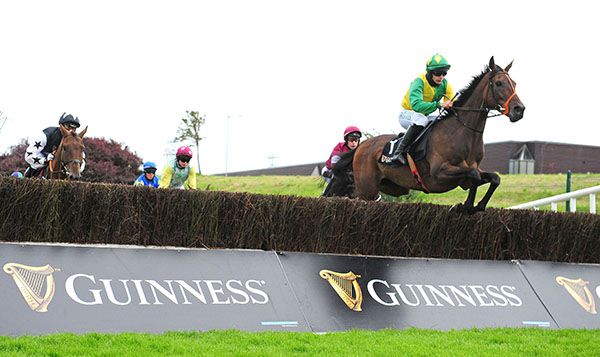 Convara gamely made all to win the Guinness Beginners Chase for Andrew Slattery and Cathal Landers.

It was a far from fluent round of jumping, but there were no weakness in his resolution to win.

He had a propensity to jump left and jumped markedly left two out and gave away a lot of ground.

He was still full of running, though, approaching the home turn. Landers brought him towards the stands' side and the pair stuck to their guns when challenged in the closing stages by the 11/8 favourite Star Max.

Convara (11/4) passed the post a length and a quarter in front of the 'jolly'. Stormey was another two and a quarter lengths back in third at 12/1.

Andy Slattery said: "We don't know would he have won or not the last day and I'd say he lost his confidence after Tipperary. He was a brilliant jumper of a fence and has improved for fences, but today is as bad as he has jumped.

"I'll keep him going in those small field novice chases and hope to pick up prize money and we'll see what happens; he might also jump better with a lead.

"I thought the ground might have been plenty heavy for him, but he said he handled it well."