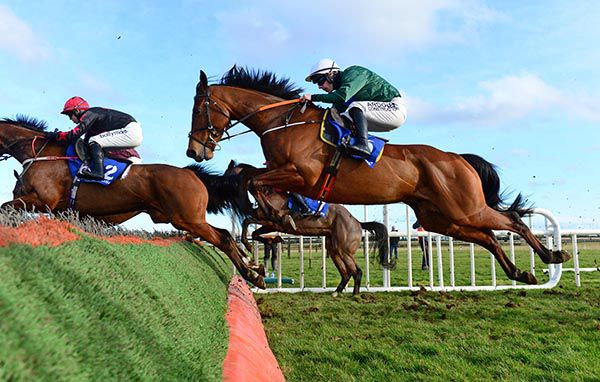 There was in-running carnage for punters in the Racing From Home Handicap Hurdle where Coole Arcade swooped late to land the spoils at odds of 5/1 under Brian Hayes.

The 6/4 favourite Stansfield looked sure to follow up a recent chase win at Down Royal when asserting after two out and traded at 1.01 on the exchanges when holding a four lengths lead at the last.

However, the distress signals soon went out and he tired dramatically on the run-in as John Clifford’s charge got up in the closing stages.

Get Home also finished well to be beaten just a neck, with Stansfield only third a further half a length away.

County Kilkenny-based Clifford said, "“That was good, it was badly needed. Hopefully we can get another day out of him before the season is over.

“I didn't think he'd go on that ground, to be honest, but he handled it well. We'll look for something similar again in about three weeks time.”

Daire McConville booted home his first racecourse winner on his father's Boogily Lane (16/1) in the final race at Fairyhouse - the second division of the two and a half mile handicap hurdle.