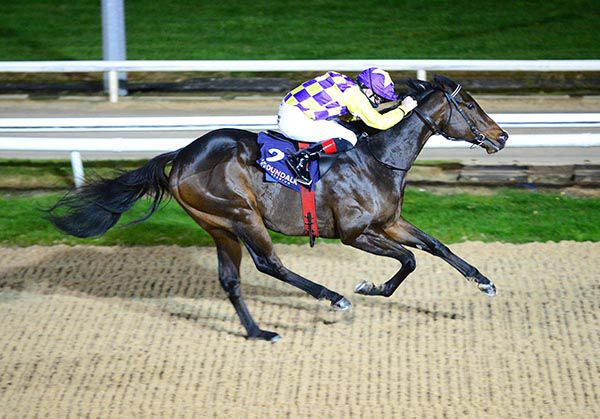 Based in Clonanny, just on the Co. Laois side of the area between Monasterevan and Portarlington, Cotter enjoyed a fine campaign with a total of 13 winners from 85 runners at a strike rate of 15% when the Turf season drew to a close in early November.

A Step Too Far (six wins in a row with her rating climbing from 48 to 91) and Paddy Power Rockingham Handicap winner Strong Johnson were among the stable stars.

Since joining forces with ex-trainer and longtime friend Danny Murphy in 2018, the results curve for the Cotter yard has steadily risen and the trainer hopes to have new stabling for an expanded team completed in the near future.

There’s been a steady flow of winners for the yard at Dundalk in recent weeks and Cotter has five runners at this evening’s meeting on the polytrack.

Dandy Spirit made a winning start for the yard over 5f a week ago and is favourite (at around 13/8) to follow up off an 11lb higher mark in the opener at 4.00pm. He’s up in grade but the draw has been kind and Declan McDonogh once again takes the mount.

The latter is quite prominent in early betting shows (around 5/1) and is a half-sister to two winners out of useful racemare Hallie’s Comet who did well for Andrew Kinsella and, latterly, Dermot Weld.

St George’s Head got off the mark on his penultimate start before being narrowly beaten last time out just over a week ago. Both of those runs were over 7f and the Kingston Hill gelding, owned by the Celtic Racing Club, runs over the same trip in the apprentice handicap at 5.00pm.

Ben Coen rides and his mount is vying for favouritism at around 7/2 in the early betting markets.

Cotter won’t mind waiting around for the concluding 1m handicap at 7.30pm as his progressive Pulse Of Shanghai is favourite (at around 13/8) to complete a four-timer.

Another by Dragon Pulse, this 4-year-old gelding has thrived with three wins over 7f at Dundalk since October, with Declan McDonogh in the saddle each time.

Positive tactics have been successfully employed for those victories, but he’s up a furlong in trip and up in grade as well in what looks a classy contest.

Given the form of the stable though, Cotter will be hoping that there is more success in the finale in keeping with has been a very rewarding year for the yard.