Coventry Stakes form to the fore at D'Royal 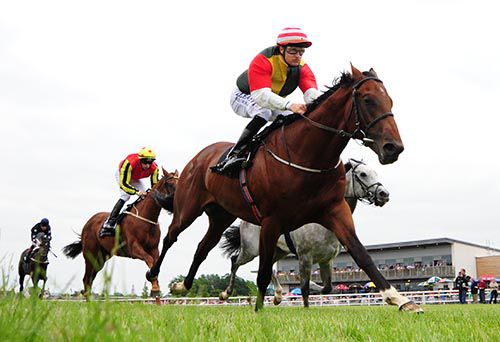 Trainer John Murphy registered his second winner in as many days when his Confrontational improved on his debut sixth placing behind Coventry Stakes winner Caravaggio when landing the opening Rainbow Communications Maiden at Down Royal today.

Ridden by Shane Foley, Confrontational was prominent throughout and and having move to the front two furlongs out, stayed on well to beat Jack Flash.

Murphy wasn’t present but afterwards Foley stated “he's a lovely horse. John started him the first day in a Listed race won by Caravaggio and we all saw what he did during the week.

"He's really well entered and John really likes him. He travelled sweetly and is held in high regard. He'll have no problem going six furlongs."

Confrontational had previously finished sixth on debut in the Marble Hill Stakes at the Curragh, behind this week’s Royal Ascot winner Caravaggio, and was following up the win of Murphy’s Papal Motel at Limerick yesterday.