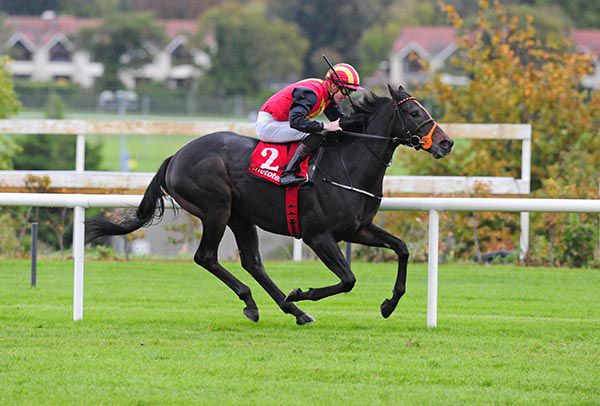 Pat Smullen Champions Race For Cancer winner Quizzical routed his rivals in the Tote Supporting Racing Since 1930 Handicap at Leopardstown today as Sheila Lavery's gelding brought up a double on the day for last season's Champion Apprentice Shane Crosse.

The son of Roderic O'Connor made all under Tony McCoy to win September's memorable and ground-breaking race run in aid of cancer research and today revelled in testing ground when beating Lusis Naturea by three and three parts of a length.

Trainer Lavery later said “I'm delighted with that. I'd say it's the first time he's met his ground this year, although we've had soft it's been tacky.

“He just loves that loose ground and he'll gallop through it. Shane said he jumped, really travelled then he took a pull and settled in behind. He had trouble pulling him up.

“It's great for the horse that he had a fully fledged one beside his name now.

“I don't know if there is anything more for him now. He's a brilliant horse to have around for those big handicaps but he just needs a bit of give.

“The Lincoln was his aim at the beginning of this year but I just got held up with a foot. I had a really troubled spring and summer with him.

“When he started to come right then it dried up. He's been very busy in the last few weeks after the rain came but I think that's him now.

“He's a great servant and great to have in the yard.

Jockey Crosse had earlier partnered Zoom Zoom Babe to win the half hour earlier Nursery, a win which meant his upcoming rides next week will be from a reduced 3lbs claim.