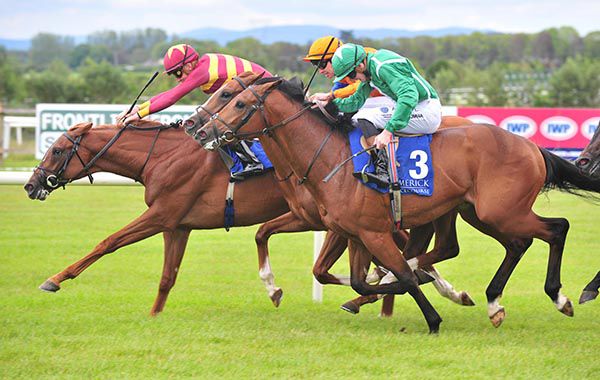 The American bred Crossfirehurricane got the ideal run through on the inner to take the opener at Limerick this afternoon, the Irish Stallion Farms EBF Maiden.

Making his debut in this seven furlong heat, the Joseph O'Brien trained chestnut was sent off an 11/1 chance under Shane Crosse.

Settled in mid-division, the son of Kitten's Joy was pushed along from the two furlong pole and soon got a dream run through on the inner.

He was ridden to lead inside the final 150 yards, and kept on well from there to score by a length in the colours of owner Scott C Heider.

Fellow newcomer Marchons Ensemble (9/2 to 10/3) had no luck in running, keeping on well close home to finish a never nearer second under Colin Keane for Ger Lyons.

The Andy Slattery trained Drasario (25/1) was another length back in third, while Erlking, who was returned the 7/4 favourite, was a close-up fourth.

Brendan Powell, assistant trainer to Joseph O'Brien, said: "It was brave for a horse first time out and from where he was. Shane gave him a lovely ride.

"All he can do hopefully is improve for it and Donnacha's (O'Brien on Erlking) probably wants to drop back to six as he didn't quite get home."

* The Stewards enquired into an incident in the closing stages involving Drasario, ridden by B.M. Coen, placed third, Golden Glow, ridden by W.M. Lordan, unplaced, Made In Pimlico, ridden by R.P. Whelan, unplaced and Simply True, ridden by L.F. Roche, unplaced, where it appeared interference may have occurred. Evidence was heard from the riders concerned. Having viewed the recording of the race and considered the evidence, the Stewards were satisfied that the incident was accidental and took no further action.

* The Stewards enquired into possible interference in the closing stages involving Crossfirehurricane (USA), ridden by S.M. Crosse, placed first, Drasario, ridden by B.M. Coen, placed third, Erlking, ridden by D. O'Brien, placed fourth and Power Source, ridden by C.P. Hoban, placed sixth, where it appeared Crossfirehurricane (USA) drifted outwards near the line. Evidence was heard from the riders concerned in the presence of Brendan Powell, who accompanied S.M. Crosse. Having viewed the recording of the race and considered the evidence, the Stewards were satisfied that the incident was accidental, they therefore made no alteration to the Judge's placings and took no further action.

* S.M. Crosse, rider of Crossfirehurricane (USA), trained by Joseph Patrick O'Brien, reported to the Stewards' Secretaries that his mount hung when he took up the lead.