Cyclone blows away rivals in Fortria 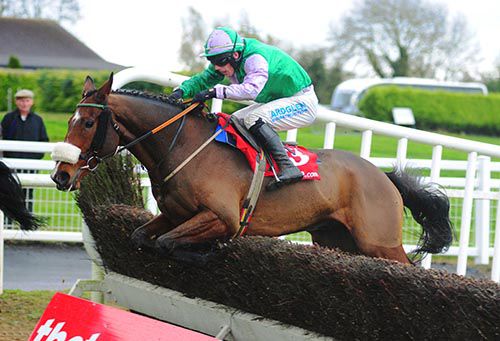 The Shark Hanlon-trained gelding was last seen in action when fourth to Quick Jack in the Galway Hurdle, and was sent off a 3/1 chance in this six-runner affair.

The well-backed Bright New Dawn (100/30) unseated Bryan Cooper at the third, and subsequently crashed through the wing of five out when running loose.

Hayes sent Hidden Cyclone to the front after Flemenstar made a mistake three out and, despite a slow jump at the last, kept on well on the run-in to beat Days Hotel by six and a half lengths.

Flemenstar weakened to finish a further five lengths back in third in this two-mile event, with easy-to-back 11/4 favourite Special Tiara soundly beaten in fourth.

Hanlon said, "He's going to improve from that run. He got to the front too soon but in fairness to Brian they were all stopping around him. When he got to the front he did nothing, although the loose horse was a help to him.

"I'd say he'll go for the Durkan next. The big thing with him this year is that he's learned how to settle. Brian has done a great job on him at home, and I'm delighted for him. He rode him to win a bumper but hasn't ridden him over fences since."

Hayes said, "That was magic and my best day in racing. To win a Grade 2 is brilliant.

"He's learned to relax this year, and over the first few I had to give him a nudge when normally he'd be running away with you.

"I knew I had the race won at the last. I let him pop it and he clambered over it. He won well in the end."

This gave Hayes a Navan double as he also landed the two mile handicap hurdle on Ancient Sands.