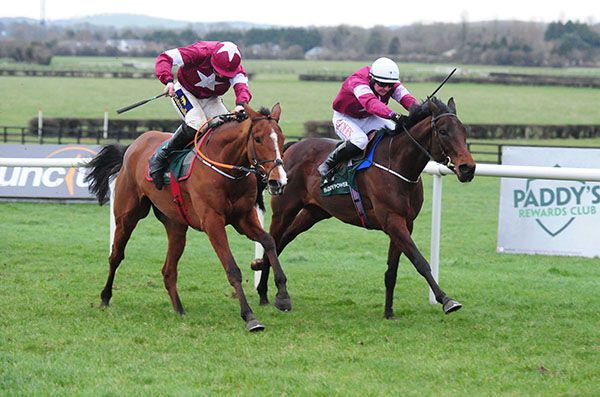 The Gordon Elliott-trained Farouk D'alene showed a great attitude to get his head back in front near the line in a thrilling finish to the bumper at Naas this afternoon.

It turned into a duel between the two Gigginstown geldings in the winners' contest.

Farouk D'alene was driven to take over from front-runner Vinnie Is Busy a furlong-and-a-half from home by was soon tackled by Fire Attack on the inner.

The later gained a narrow advantage inside the final furlong but Jamie Codd got a good tune from Farouk D'alene in the closing stages and he found more late on to edge the verdict by a head.

The winner, who had made an impressive 'track' debut at Down Royal over Christmas was easy to back today, returning 7/4 favourite having been as short as 4/6 in the morning.

Elliott said:- “He’s a raw horse and one for the future. He’ll have an entry for Cheltenham but it would have to come up soft for him to go.

Paddy Power left the winner unchanged at 12/1 for the Champion Bumper at Cheltenham.