Davis Flawlessly gets Lavery filly up in time 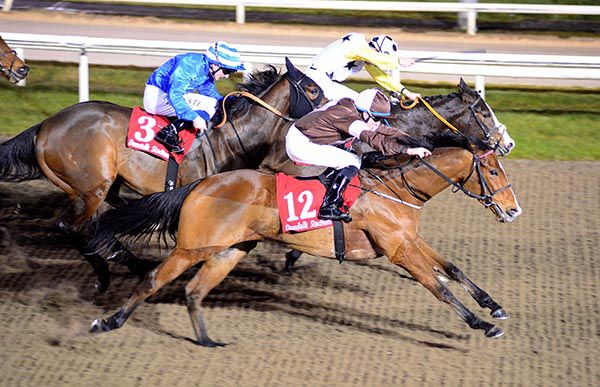 The Happy New Year From All At Dundalk Stadium Handicap was a messy affair that eventually went the way of 12/1 chance Flawlessly.

Whilst some met trouble in running, Sean Davis plotted a clear route through on the Mugs Syndicate-owned and Sheila Lavery-trained bottom-weight Flawlessly, after switching right over a furlong out.

Four pounds out of the handicap she may have been, but the daughter of Exceed And Excel got there in time to edge out Oneoveryou (last year's victor of this sprint) by half a length.

"She's been very unlucky and when I saw the draw I thought I was going to be done by that again," said Ms Lavery.

"There was quite a bit of scrimmaging and I thought she was going to be trapped for room.

"She's just got better and better and I'm delighted with her. She well deserved that and hopefully there is more of the same. We'll just keep trying to go up in the handicap with her.

"Sean brought her back into the handicap so hopefully the handicapper isn't too hard on her. It kind of snookers me if he is because then there isn't anything for her for ages.

"I took a chance running her tonight in case she didn't get in next week. She just keeps running as she loves the fast surface and we'd just love to go up the grades with her in time.

"She has very patient owners. They bought her for the paddocks and they were going to send her this spring but luckily for me they're not. I have her for another year."

The Stewards enquired into an incident in the straight involving Captain Dion (GB), ridden by C.T. Keane, Geological, ridden by S.M. Mooney, Alfredo Arcano, ridden by C.D. Hayes, Kindly (GB), ridden by D.W. O'Connor, and Danz Gift, ridden by W.M. Lordan. Evidence was heard from the riders concerned. Having viewed the recording of the race and considered the evidence, the Stewards attributed the incident to general bunching and took no further action.

R.P. Cleary, rider of Lily's Prince, trained by Garvan Donnelly, reported to the Stewards' Secretaries that his mount checked before the turn into the straight.

The Thanks To All The Frontline Workers From Cork Racecourse Handicap (Div I) was won by Youceeyouceecee (17/2, from 12s first show) completing a quick 40/1 double for Billy Lee.

Ashqar off the mark for Gilligan and Enright

The opening kilbegganraces.com Maiden Hurdle went to Ashqar (11/2) who got up on the line for a head victory over Grange Walk.