Day follows up on handicap debut 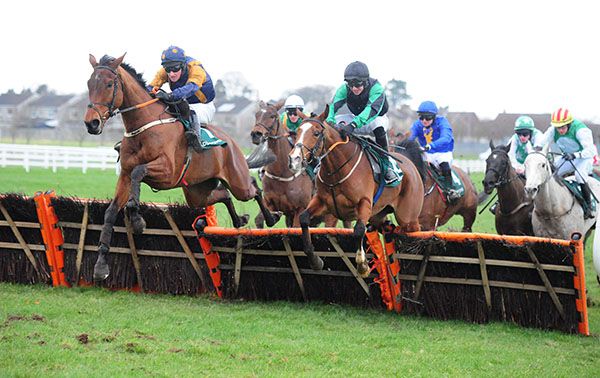 Aarons Day continued on the upgrade when running out a convincing winner on his handicap debut at Naas this afternoon.

The Oliver McKiernan-trained gelding had been an easy winner of a 'unplaced' maiden hurdle at Fairyhouse last month and was well supported (7/1 into 3/1f) to follow up.

Barry Browne produced his mount to challenge going to the second last and he edged ahead from Greenpanda after the last flight.

The Doyen gelding galloped on strongly in the closing stages to post a length-and-a-half winning margin. Ardamir stayed on well to grab the runner-up spot close home.

McKiernan said:- “We were concerned about the ground. I walked the track earlier and the hurdle course was a good bit better than the chase track so we said we’d run him.

“He showed a good bit of pace in the end. It was two and a half miles the last day in Fairyhouse so we know he stays further.

“I’m not sure where we will go now — maybe he could go to Punchestown. He’s a big green baby and has a bit of learning to do but he’s going the right way.

“Barry kept him out wide but he felt it was better to give him a bit of daylight and he settled good enough.”