Destination takes the feature at Navan in style 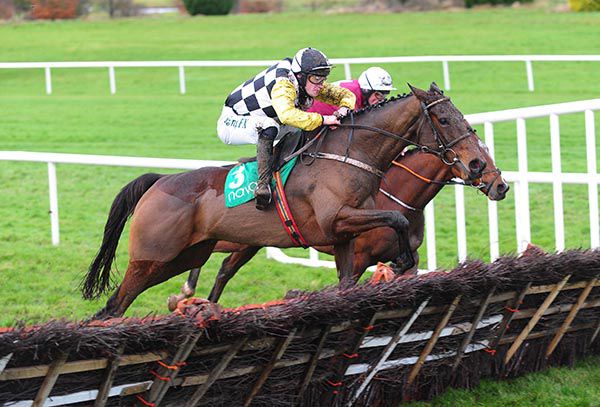 Next Destination made it two from two over flights, as he came home a comfortable winner of the feature at Navan this afternoon, the Grade 2 Navan Novice Hurdle.

Having impressed on his debut over flights, the Willie Mullins trained five-year-old was sent off the 10/11 favourite this afternoon.

He briefly looked in trouble as he dropped to fourth three out, however he was back on the bridle before the last, and was pushed out on the run-in, coming home five and a half lengths to the good.

Cracking Smart (7/4) kept on to take second under Jack Kennedy for Gordon Elliott, while Jetz was another lengths and three parts back in third.

David Mullins was aboard the Malcolm Denmark owned victor, and he said afterwards: "I was amazed at how he picks up out of nowhere. You would think you were nearly falling asleep a bit.

"He missed the second last and I just got after him a bit, and he picked up two or three gears. He's won well at the line but I think there is plenty to come still with him.

"He has the right mentality for a good trip but he picks up when you ask him. The second you want him he's there."

The winner was completing a cross card double for Willie Mullins, after he earlier took the opener at Thurles with Koshari.

Paddy Power go 11/2 (from 10s) about Next Destination for the Ballymore Novices Hurdle at Cheltenham in March.