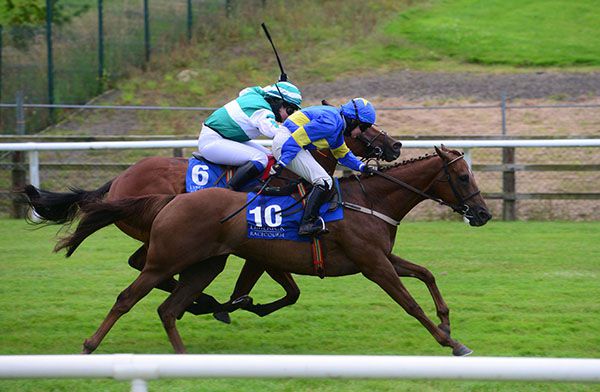 Dysart Diamond was a sixth winning favourite at Limerick this evening, as she got the better of outsider Sonny John in the concluding Askeaton (Ladies Pro/Am) Flat Race.

Fourth on her debut over the course and distance in November, the Willie Mullins trained chestnut since finished third at Punchestown and Thurles respectively.

Expected to make the breakthrough today, the daughter of Shirocco was sent off the 5/4 favourite (3s in early shows) under Jody Townend.

Settled behind the leaders on the outer, the chestnut victor improved to lead on the approach to the straight, but soon had a challenger in the shape of Sonny John.

The pair had a good battle from the furlong pole, with Dysart Diamond gaining the upper hand close home, going on to score by a length and a quarter in the colours of owner/breeder Eleanor Manning.

Sonny John (80/1) had to settle for second under Phidelma Elvin for 'Dusty' Sheehy, while newcomer Erins Benefit (6/1) ran a nice race to take third, a further two and a quarter lengths back.

"She deserved to get her head in front, she is as tough as nails and deserved her day," said Townend.

"She had solid form and apart from Gordon's (Elliott) newcomer, we were confident enough. She'll win more races."

* The Stewards interviewed Miss P. Elvin, rider of Sonny John, concerning her use of the whip in the closing stages of this race. Evidence was heard from the rider concerned. Having viewed a recording of the race and considered the evidence the Stewards found Miss. P. Elvin in breach of Regulation 10, 3 (i), time to respond and 10.3(e) the hitting of the horse other than down the shoulder or on the hind quarters. Having considered Miss. P. Elvin's record in this regard the Stewards suspended Miss. P. Elvin for four racedays and instructed her to attend R.A.C.E for one day of tuition on the use of the whip.