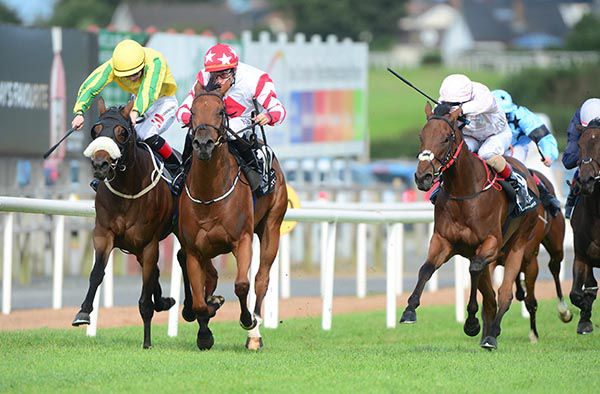 Rockview Spirit experienced some trouble in-running over a furlong out but once switched to the outer, quickened nicely to eventually poke her head in front at line, to deny Sundance Star and Rita Levi.

"She shows she's fast and we were a little disappointed with her the last day, although I thought it wasn't a bad race and she could have been in season. She was just a bit quiet so we just freshened her up.

"She has shown plenty of speed and guts to get out of a hole; she didn't get a clear run at a crucial time and he didn't hammer her. I'm delighted.

"I did have my eye on a Listed race in Ayr - it's a five furlong race for two-year-olds and she wants quick ground."

Incident aplenty but the Baron keeps on winning

We had thunder in the area, the favourite Sayo slipped up before the straight, and a lively feature, the Listowel Printing Works Handicap, eventually went to 4/1 second market choice Baron Samedi.

Listowel rider Gearoid Brouder was thrilled to get a first winner at his local track when successful aboard Ramiro in the David McManus Bookmaker Handicap.