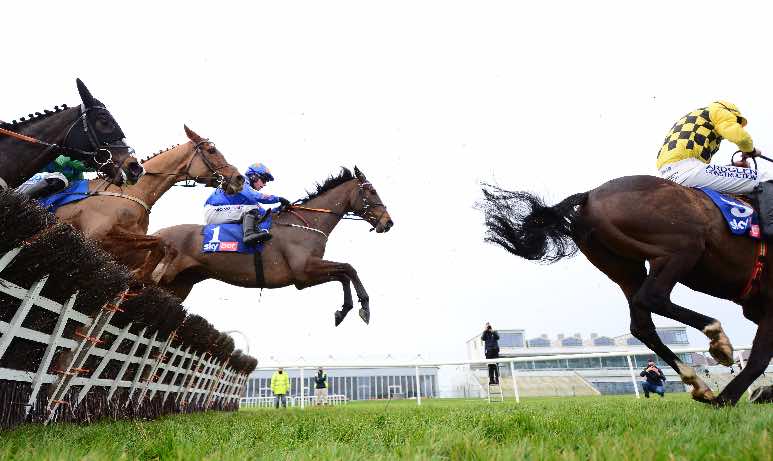 The six-year-old was rated just 84 when his winning sequence began at Navan in September, since when his progress has been nothing short of remarkable.

After successfully reverting to the Flat with back-to-back wins in October, Dreal Deal has won three more races over hurdles — completing his six-timer with a Grade Two success in the Moscow Flyer Novice Hurdle.

“Sunday was an amazing day — we really enjoyed it. Hopefully there are even better things to come,” McNally said.

“We did think he was a good horse when we bought him. The fellow that advised me to buy him thought he was the best horse he’d ever had through his hands.

“It’s well documented we’ve had aspergillus, and he never really had a chance to show his best because of that.

“Now he’s got his health, he’s definitely some machine.”

McNally confirmed his stable star will head straight to Cheltenham in March, for either the Supreme Novices’ Hurdle or the Ballymore.

While the County Armagh-based trainer considers the Willie Mullins-trained Appreciate It and Henry de Bromhead’s Bob Olinger as formidable rivals, he is confident his stable star has not yet reached the ceiling of his ability.

He added: “He’s in the Supreme and the Ballymore. I need to sit down with Denis (O’Regan) and work out which race would be best for him.

“He’s won over two-mile-six (furlongs), so we know he stays. He’s won over a mile and a furlong on the Flat and has won a Grade Two over hurdles over two miles, so it’s just trying to work out what the best option for him is.

“The stand-out horse for me this year has been Appreciate It. To me, he has been head and shoulders above anything I’ve seen this season in the novice department.

“The handicapper has us around 7lb behind him, so we have a bit of catching up to do, but there’s nothing to say we can’t make up 7lb.

“Bob Olinger is another stand-out, and I think he’s going for the Ballymore. They look the two stand-out novices, but I’d say we’re not a million miles behind them.”

McNally reiterated his belief that Dreal Deal was not at his best despite winning on Sunday, adding: “The day I was meant to go to Ascot with The Jam Man just before Christmas, I had ridden Dreal Deal in the morning and he didn’t sound great on the gallop. I ended up scoping all the horses, and the only one that scoped well was The Jam Man.

“I gave them all an easy week, and then over Christmas we had a bit of frost. Dreal Deal wasn’t eating great at the time, and his coat was a bit dry looking, so nothing really was going to plan.

“With the preparation that he had, it was hard to believe that he’d go and beat all the big guns in a Grade Two. I think it’s testament to how good the horse could possibly be that he did win.

“I actually think he’s come out of the race better than he went into it, which might sound a bit bizarre. He only lost six kilograms, which is less than a horse might lose after a day’s galloping.

“He could be anything, which is an exciting prospect.”

McNally has previously stated his desire to have a leading owner like JP McManus in his yard, but as yet he has received no concrete offers for Dreal Deal.

He said: “There was an enquiry after the race, with someone asking if he might be for sale. I said I was open to listen to offers, but there hasn’t been anything firm.

“There’s no panic either way. He does look a good enough horse now for some of those bigger owners, but we’ll just see how things unfold.

“He’s an exciting horse for us to go to war with ourselves if nobody is interested.”