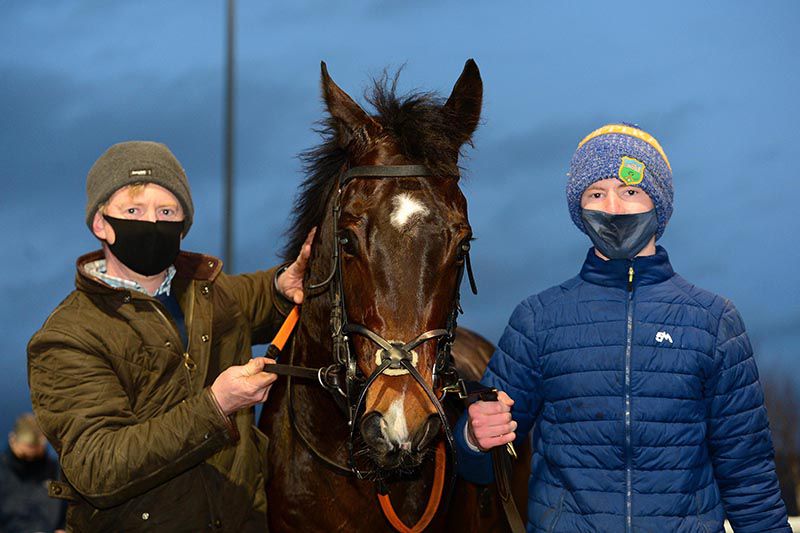 The Commins family from Thurles were perhaps primarily associated with Pumbaa, a six time winning jumper that they also bred, in the past.

It’s hardly fanciful thinking to suggest that there are plenty more good days ahead with Drish Venture too, a son of first season sire sensation Mehmas.

Bred by Mark Commins the victor made all, and Lordan asked for more from under two furlongs out.

Clear a furlong out Drish Venture stayed on strongly in the final furlong to comfortably defeat Collective Power by two and three parts of a length.

“My son Paul does most of the work with this horse so deserves a lot of the credit,” said Commins.

“He had a very big run here last time but he just hung a bit right so we put a pricker on him.

“He did everything right today, broke lovely and popped out there. Wayne gave him a super ride.

“We couldn't be any happier, he won very well. I'd say we could even drop him back to five.

“We had him trained for the breeze-ups and he was kinda off his head a bit and we have to take him down to the start early. He's settling now though and doing everything right for us at home.

“He's Paul's horse really. He does the feeding, the mucking out, the brushing, everything with him. I also have to thank my father Donal who is a big help.”

C.J. MacRedmond, rider of Ablah (USA) trained by Adrian McGuinness, reported to the Clerk of Scales that his mount missed the break.