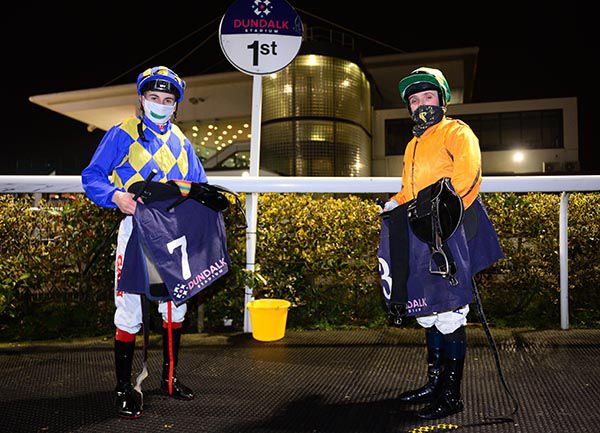 Nothing separated the James McAuley trained Caesar's Comet, under jockey Chris Hayes, and the Andy Slattery trained Sunset Nova, under the trainer's son Andrew Slattery, with the latter scoring a fourth career success and Sunset Nova bagging his own third such win.

McAuley enjoyed high profile success with top class sprinter Sceptical when the owner/trainer had many horses in training, until very recently, with trainer Denis Hogan and indeed Caesar's Comet was claimed from Hogan's yard on December 4.

Following Caesar's Comet's dead-heat success, McAuley explained “we'd seen plenty of him in Denis Hogan's so we had a bit of inside info when we claimed him (from the Premier Racing Club).

“There were plenty of claims in for him so he wasn't going back to Denis' anyway so we threw a claim in. We're delighted with him.”

He added “we have a vibrating floor in the yard now. Jim (Gough) spent €20,000 putting it in and it's made a huge difference to any of the horses with a few issues.

“I'd say that's had more to do with where he's at now than me. It's definitely helped with soundness and I'm delighted with him.”

Dead-heater Sunset Nova, who runs for Tipperary's Men Of Forty Eight Syndicate, was himself completing consecutive course wins at today's seven furlongs trip, having also won at the venue in December.

Muir has big plans for Pyledriver

William Muir has outlined a “road map” for Pyledriver, who he feels will make his mark in 2021.

The ground at Clonmel has dried slightly and is now soft to heavy ahead of the meeting this afternoon.