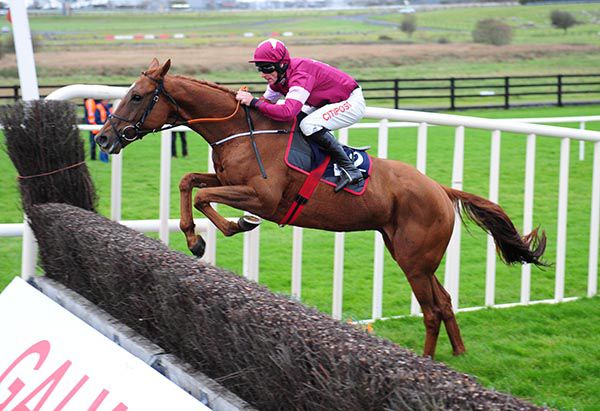 Woods Well took the scalp of odds-on-favourite Rashaan by a neck in the Ryans Cleaning Chase at Galway.

Woods Well was always at the head of affairs with Minella Beau in this extended two miles six contest.

Rashaan raced in third of the four runners but was niggled along after seven out. He was careful six out and soon dropped off the front pair.

Rashaan looked in trouble jumping the third-last as he was a full seven lengths adrift and scrubbed along by Robbie Power.

Woods Well tanked along and led narrowly two out from Minella Beau as Rashaan then began to cut into the deficit.

Davy Russell went for the whip on Woods Well approaching the straight on the long run-in.

Minella Beau cracked at the furlong pole as Rashaan came with his challenge on the inside.

“Ours normally all come on from their first run and I thought he'd come on from it as well. Davy said he had a nice blow.

“The race suited him, he gave him a good ride and he jumped well.

“That's why Davy is so good. If they had gone an end-to-end flat out gallop it would have played straight into Rashaan's hands. Rashaan was only getting going at the end.

“It was a nice race to win. I'd say we'll look at the Troytown at Navan with him.”