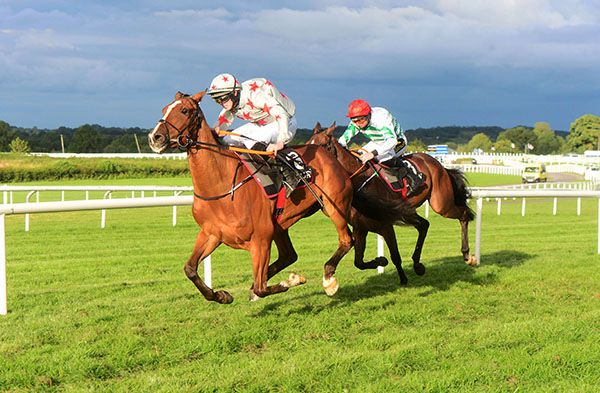 Talk Of The Town beats his stablemate
© Photo Healy Racing

Geraldo picked it up under Jamie Codd approaching the home bend, but the pair were soon swamped by Talk Of The Town and Hugh McOwan.

Talk Of The Town stayed on best in the final furlong to win going away by three and a quarter lengths from his more-fancied stablemate.

This was a first track success for jockey McOwan who is 19 and from Co Kilkenny.

Assistant trainer Ian Amond said: “It was a bit of a surprise; the other lad was the better fancied of the two, but he's won well.

“He hadn't shown a whole pile at home, but he's gone and won well there. He's a fine, big horse and he'll come on plenty from that.

“It's nice for Hugh to get his first winner. He's been with Gordon for a year now and he's a good young lad. He's a cousin of David Mullins.”

Elliott's other winner on the card was Mengli Khan.