Elliott doubles up with Clondaw Secret 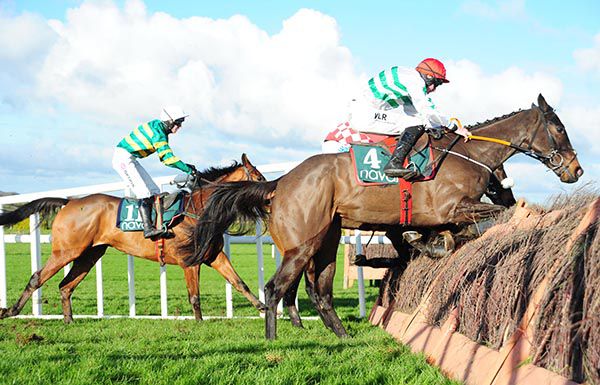 Clondaw Secret stayed on well to collar Lifetime Ambition in the second split of the two and a half mile maiden hurdle in Navan.

Lifetime Ambition jumped the second last in unison with Genois as Clondaw Secret closed on them in third.

Genois dropped to third at the final obstacle as Lifetime Ambition took a narrow lead from Clondaw Secret.

The latter wasn't fluent at it but was soon tussling with Lifetime Ambition on the run-in. The pair were locked together until Clondaw Secret edged ahead in the closing stages.

The 8/1 shot prevailed by half a length from the 9/4 joint favourite. Genois (3/1) could give no more in third, a further four and a half lengths away.

Gordon Elliott said: “He’s a nice big, raw horse. I was toying with running him in the bumper today but I said I’d split them up. Jumping is probably his game.

“It’s great for Noel and Valerie Moran. They are the big sponsors today and are local people. It’s their first winner at Navan racecourse.

“I thought Jack (Kennedy) was very good on him. He let them all race away and had a go going to the last. If he got involved two out he would probably have got tired. There is only one winning post.

“He’s still very green. He might not be a graded horse and is probably more of a chaser.”

Clondaw Secret landed a Boulta point-to-point for Michael Goff almost a year ago.

Elliott also took the opener on the card with Magic Tricks.

Paddy Power gave Clondaw Secret a first show of 25/1 for the Ballymore and 33/1 for the Albert Bartlett.