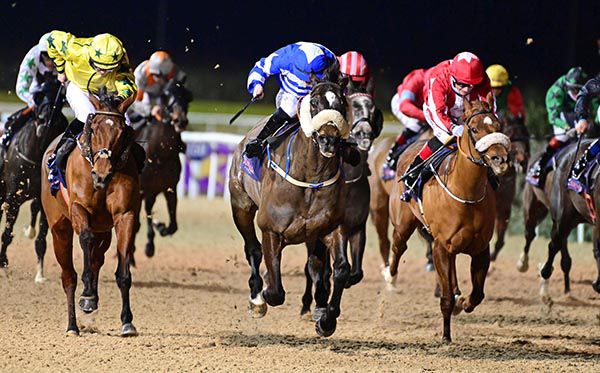 The Epaulette gelding was gaining a third win from four starts, and Danny Sheehy was aboard on this occasion.

Another one out wide, Neyland (11/1) gave the Breen White-owned and John Larkin-trained 10/1 victor most to do but Emphatic toughed it out best by a neck.

“He got a great ride, it's as simple as that. They are all great rides when they win!” said Larkin.

“He's going well here at the moment. The new surface suits him as it's not as firm as the old one. He didn't handle the old surface.

“We'll keep tipping away with him. We were going to put him away for the summer, and maybe wait for Galway, but when they're in that sort of order you keep at it.”

A.J. Farragher, rider of Overtake (GB) trained by M. Halford, reported to the Clerk of Scales that his mount clipped heels at the bottom of the straight. He further added that his mount was very keen and ran in to the horse in front of him. Having viewed a recording of the incident and considered the matter the Stewards were satisfied that no further action was warranted.