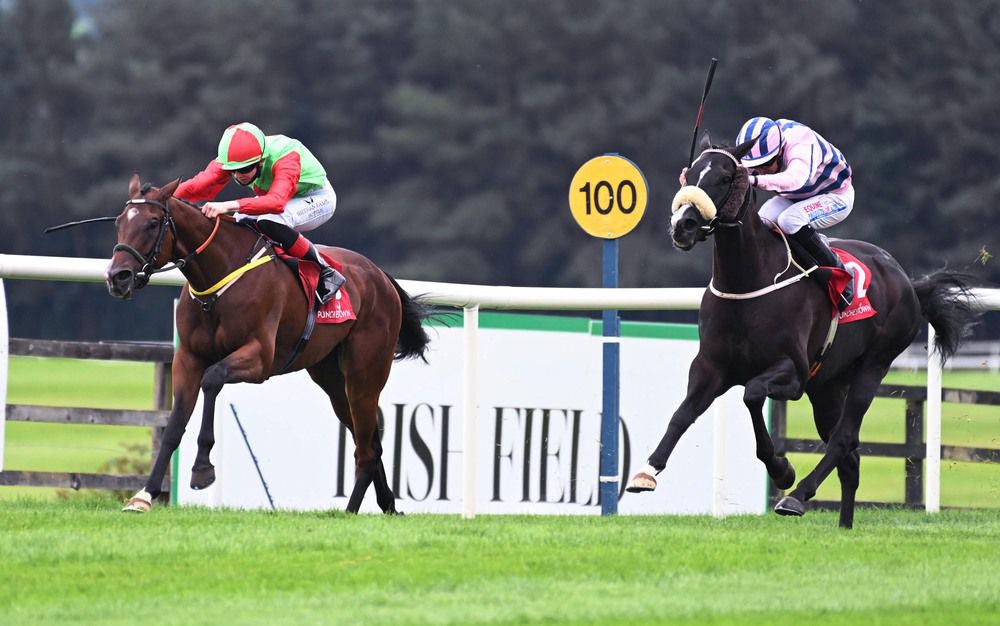 Evergreen And Red recorded his second win of the season, as he justified favouritism in the first divide of the Irish Racing Working Together Handicap.

A winner on his handicap debut at Cork in May, the Noel Meade trained three-year-old finished a close-up third on his most recent start at Navan.

Sent off the 2/1 market leader today, the son of Requinto was settled in mid-division by seven pound-claimer Paddy Harnett.

He was switched to the inner over a furlong out and got a dream run through, hitting the front inside the final 150 yards before going on to score comfortably by two lengths.

Jazz Dreamers (11/2), who attempted to make all, had to settle for second under Willie Byrne for Seamus Fahey, while Bosca Cheoil was a neck back in third, with Rory Cleary aboard this 12/1 chance for Jim Bolger.

Meade said in the aftermath: "I said to him in Navan 'whatever you do if you are going to get beat, get beat for coming too late - not too early'. Hence he took it up coming down the hill and got beat.

"I said the same thing today but I was thinking to myself 'oh my God, where has he gone now!' I have to watch that race again as I don't know what happened, I suppose he gave him a good ride!

"He's a leggy horse and I suppose we'll try something similar. I'd say that trip, a mile-and-one or a mile-and-two, is about his trip. He likes a little ease in the ground but probably doesn't like it soft.

"We'll see what the handicapper does and we'll school him as well and see how that goes.

"He's called Evergreen And Red because the people that own him (the London Racing Partnership) are from Mayo."

R.P. Cleary, rider of Bosca Cheoil trained by J. S. Bolger, reported to the Clerk of Scales that his mount got carried across the track.

The Stewards reviewed an incident about one and a half furlongs from the finish involving Rockview Empress, ridden by D.W. O'Connor, unplaced and Evergreen And Red, ridden by P.A. Harnett, placed first, where it appeared that Evergreen And Red checked off Rockview Empress when that animal drifted left and across his racing line. Having reviewed the recording of that part of the race and considered the matter, the Stewards were satisfied that no action was warranted.

The Stewards reviewed the closing stages of this race involving Jazz Dreamers, ridden by W.T. Byrne, placed second and Bosca Cheoil, ridden by R.P. Cleary, placed third, where it appeared that both horses drifted. Having reviewed the recording of that part of the race and considered the matter, the Stewards were satisfied that no action was warranted.

The Irish Horseracing Regulatory Board Veterinary Officer reported to the Stewards that Dangeroffizz trained by T.G.McCourt was found to have blood at both nostrils post race.