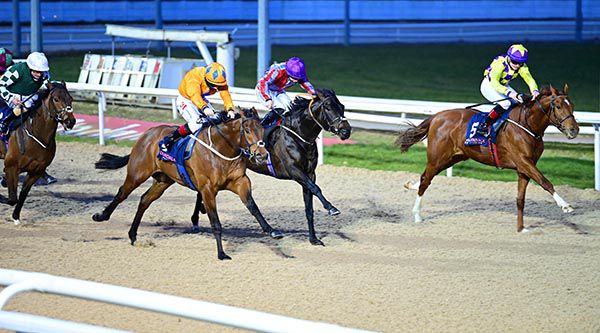 Ewing won the first on Everyhouronthehour for William Ross, and despite still being green Gold Phoenix clearly has plenty of latent talent.

He stormed home towards the inner to touch off another first-timer, Gegenpressing, by half a length.

It was another half a length then to San Aer in third, with plenty of promise as well from Powerful Aggie, a debutant as well, a neck back in fourth.

“It's another winner for Dr Tan and Jim Ryan so we're delighted for them,” said Cotter.

“We didn't think he'd be up to winning first time out. He's a nice horse at home but we thought this was the bottom end of his trip.

“It's always nice when a horse is able to win below his distance. He was in a little bit of trouble for pace early on but galloped home well to the line.

“He'll definitely go further and he'll progress as the season goes on. He's one to look forward to, he's a smart horse.

“He was still green and running about. Sam switched inside and at least he had the rail to take him up to the post. He hit the line well.

“It wasn't the strongest maiden but you can only win it and he'll progress from here.”

Sam Ewing, rider of Gold Phoenix trained by Kieran P. Cotter, reported to the Clerk of Scales that his mount ran green.