Ewing's claim down to seven after third winner 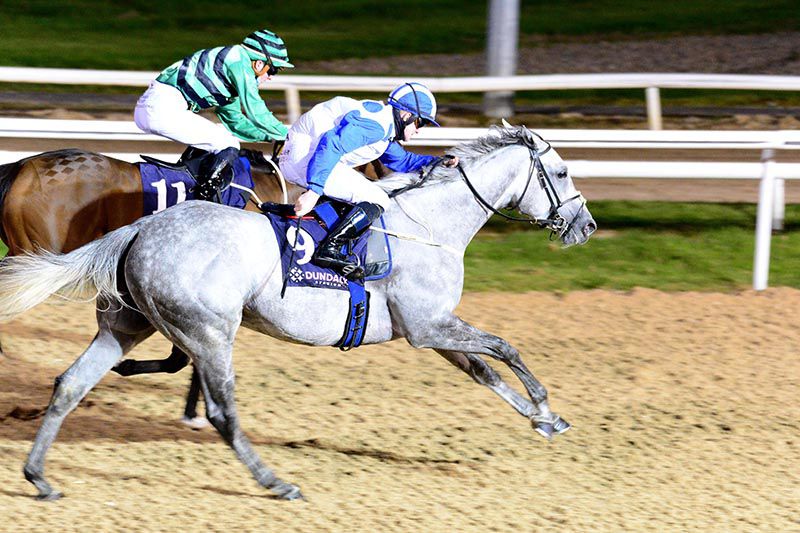 Ela Katrina (Sam Ewing, nearside) just got the better of Spelga (Adam Farragher)
© Photo Healy Racing
Sam Ewing rode his third winner, and second for his master, Ger Lyons, when just getting home in front aboard Ela Katrina in the Hollywoodbets Apprentice Handicap at Dundalk.

Ewing’s claim goes from ten down to seven now, though he has a couple of days ‘grace,’ and he’s only likely to get more popular with trainers having carried his pony race riding ability to the track.

It could have went either way until ‘the death,’ and the photo finish showed that Ela Katrina (15/2 into 11/2) had short-headed Spelga.

Well-backed favourite Liquid Luck had to settle for fourth. He led three furlongs out before yielding to Spelga a furlong and a half from home.

“She’s a filly that loves it around here. She doesn’t show us an awful lot at home. She’s a relaxed character but lightens up on that nice surface,” said Lyons’ brother Shane.

“The soft ground didn’t suit her the last day and she hadn’t run for a while so she was a bit fresh.

“We’ll see what Sean (Jones) and David (Spratt) want to do. She’s a half-sister to Pallasator, and will run all the way up to the breeding season.

“That is Sam’s third winner so his claim will go down to 7lb now. He’s a big lad but he has a clock in his head and he knows what’s underneath him. He’s impressed us.”

The Stewards informed James McAuley, trainer that Timemakesitfine, would have to be recertified before being declared to run from stalls again.

S.T. McCullagh, rider of Cautious Approach (GB) trained by Richard John O'Brien, reported to the Clerk of Scales that his mount never travelled during this race.

L.T. McAteer, rider of Spruce Meadows trained by John James Feane, reported to the Clerk of Scales that his mount never travelled during this race.

The Irish Horseracing Regulatory Board Veterinary Officer examined Spruce Meadows, trained by John James Feane, at the request of the Stewards and reported the animal to be coughing post race possibly as a result of kick back.

The Stewards enquired into the running and riding of Chess Grand Master (GB), ridden by Vanessa Maye, and trained by C. Moore.

Evidence was heard from the trainer and rider concerned.

C. Moore stated that the owner had acquired this animal with a past tendon injury and today was his second run in his care.

He added that he had instructed the rider to jump out of stalls smart, get a good position and make the best of her way home.

He expressed his overall disappointment with the run but was satisfied with the ride considering that his charge was unable to go with the fast early pace having jumped out of stalls slowly.

Vanessa Maye confirmed the riding instructions and explained her ride while the video was played.

She stated that her mount was slowly away, was unable to go the very fast pace, never travelled at any stage of the race and only ran on a little in the straight.

She also explained that she did not apply the whip when she knew that she was not in a position to be involved in the placings.

The Stewards also received a report from the Irish Horseracing Regulatory Board Veterinary Officer who stated that Chess Grand Master (GB) was coughing post race and evidence of a previous tendon injury was noted.

Having viewed the recording of the race and considered the evidence, the Stewards noted the explanations but reminded Vanessa Maye concerning her responsibility to report any matter that may have affected her mounts performance this being her obligation under Rule 213.

Mr. P.N. Reynolds, Acting Steward absented himself from this enquiry and Mr. Justice T. Hunt acted as Chairman of the Acting Stewards