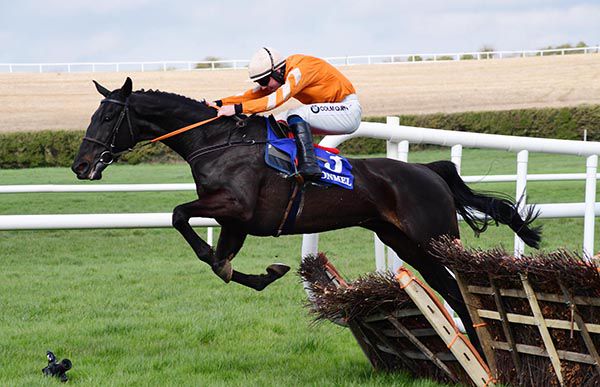 After their sponsorship of the Derby at the National Coursing Meeting at Clonmel last month, Boylesports returned to Powerstown Park today to back the majority of the card. Action began with the Money Back On The BoyleSports App Maiden Hurdle and we had an impressive winning favourite in the shape of Farmix.

Second on his two previous outings over flights, which also came about at the County Tipperary venue, Liz Doyle’s Farmix (Donagh Meyler up) made no mistake this afternoon.

The M L Bloodstock Limited-owned French-bred made all, jumping well, and asserting in the straight for a twenty length verdict from Rebel Gold.

Doyle was not present but said by phone, “He did it well and I’d say the slightly better ground has brought about a good bit of improvement.

“The twice he ran here before the ground was very deep and while he coped with it, I think the drier ground has helped him excel and it was never really in doubt.

“He’s a huge horse at over 17 hands and whatever he does over hurdles, I think he’ll be a 20lb better horse over fences.

“We’ll keep going with him for the time being before hopefully going chasing with him next season.”

Meyler said, "He was well due that and the form was franked a bit last week in Down Royal. He actually impressed me today and hopefully he can improve again."

K.M. Donoghue, rider of Coolagh Park (GB) trained by Gordon Elliott, reported to the Clerk of the Scales that his mount burst.

P.T. Enright, rider of Miss Sophiea, trained by S. Curling, reported to the Stewards' Secretaries that his mount slipped up independently.

The Irish Horseracing Regulatory Board Veterinary Officer examined Florrie Webb, trained by Henry de Bromhead, at the request of the Stewards and reported the animal to be post race normal.