Felix does it again in the Hilly Way 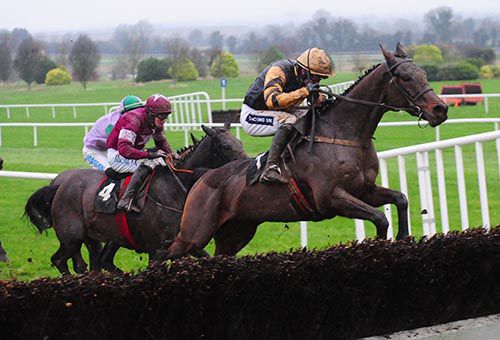 Felix Yonger made it back-to-back wins in the feature at Navan, the Grade 2 Kerry Group Hilly Way Chase (transferred from Cork which was cancelled yesterday).

Successful on four of his five starts last season, the Willie Mullins trained nine-year-old finished third to Road To Riches on his seasonal debut in the Clonmel Oil Chase last month.

Sent off the 11/10 favourite today (was 6/4 last night and opened at evens on-course) he raced behind the leaders under Ruby Walsh.

It wasn't until after the second last that Walsh asked his mount to quicken, and that's exactly what he did as he swept from fourth to first in a matter of strides.

He was then driven out on the run-in, stretching clear in the closing stages to score by two and a half lengths in the colours of Graham and Andrea Wylie.

Bright New Dawn (4/1) finished second under Bryan Cooper for Gordon Elliott while Hidden Cyclone was a further three parts of a length back in third.

Ruby Walsh said afterwards: "He did it well. The ground was heavy enough for him.

"He had the form in the book and had a good run in Clonmel. He finished off last season in style (winning a Grade 1 at Punchestown).

"I wanted to come with one run in that ground. He's not short of speed."

Willie Mullins added: "He was very good considering it wasn't his ground.

"Ruby kept him for one run. He's always had a little bit of class and showed it today.

"I'd imagine Christmas will come too soon for him and we'll look for a two-mile or two-and-a-half mile race in the New Year.

"I doubt that he would go to England. We'll try and keep him at home and earn his feed."

Paddy Power go 10/1 (from 14's) about the winner for the Paddy Power Dial-A-Bet Chase at Leopardstown over Christmas, while they have also shortened Un De Sceaux from 1/2 to 2/5 for the same race.

Powers have also introduced Felix Yonger into the betting for the Queen Mother Champion Chase and the Ryanair Chase, installing him at 25/1 for the former and 16/1 for the latter.

* D.E.Mullins rider of Twinlight (FR), trained by W.P. Mullins, reported to the Stewards' Secretaries that his mount never travelled and was pulled up.