Foley has Roman out smart for the win 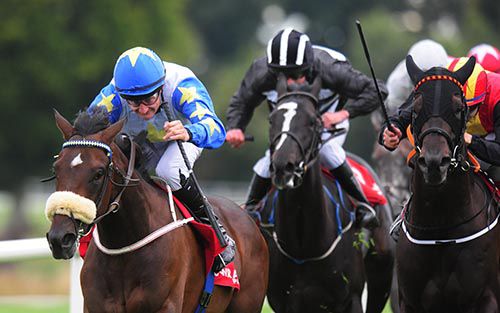 A native of the locality, Shane Foley is obviously familiar with Gowran for a long time, and he earned the plaudits from trainer Michael Halford, after winning on favourite Reddot Roman in the Irish Stallion Farms EBF (C & G) Median Auction Maiden.

"I was very worried about the draw. It's an awful disadvantage here being so wide (fourteen of fourteen) but Shane got him out smart," reported Halford.

The Tay Hu Chor-owned Reddot Roman built on a good debut second placing at Roscommon on August 17th, with a half a length success.

Reddot Roman came through from mid-division to lead a furlong and a half out, before accounting for the 'finisher,' Sevenleft.

Halford further explained: "He learned from Roscommon. Like most of ours he improved for a run.

"He's a straight-forward colt and he was just a bit green when he got to the front.

"I'm delighted for the owner who is a great supporter of ours. He's from Singapore but he's coming over in a few weeks. It'll be his first time to visit.

"I'm not sure where we'll go next with this fella - maybe for a nursery."

Keane and Lyons double up with Mr Wendell

Colin Keane and Ger Lyons completed a double on the afternoon at Gowran Park as Mr Wendell put up a fine front-running performance to land the Holden Plant Rentals Race.

Rachael Blackmore doubled up at Navan today when Somptueux ran out a convincing winner of the beginners chase on the card.

Enable in fine form ahead of historic Arc hat-trick bid

John Gosden gave an update on some of his stable stars during the first virtual Henry Cecil Open Weekend.

Road To Dubai took advantage of the withdrawal of two of his challengers, notably morning-favourite Premium Package, when justifying 4/11 favouritism to win the BarOneRacing.com Online Loyalty Club Hurdle at Navan today.