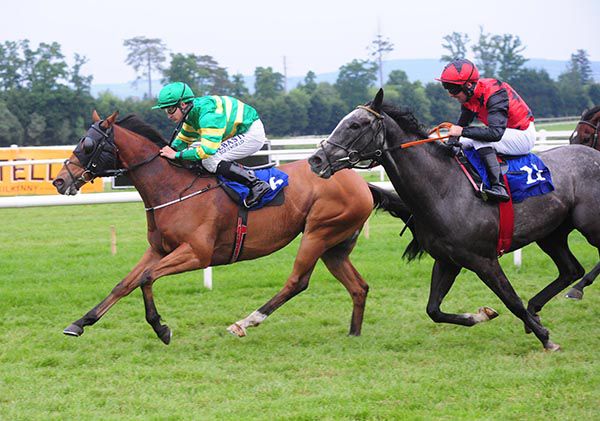 After his 2,000 Guineas heroics on Romanised at the Curragh on Saturday Shane Foley was back to display his talents in front of his home supporters on Arbourfield (9/1 into 7/1) in the Helmet Day June 4th Handicap at Gowran.

The Graignamanagh man had ridden Circling Moon a winner for Johnny Murtagh here last night, and on Prunella Dobbs' Arbourfield he got the job done by half a length from Dancle Alone.

Mrs Dobbs said afterwards: "That's his seventh win but it's his first one on grass. It's the first time we have had all the conditions suiting him.

"He's been ultra consistent and we've had a lot of fun with him. We'll be hoping for a dry summer."

W.J. Lee, rider of Bien Chase, trained by Adrian McAllister, reported to the Stewards' Secretaries that his mount did not come down the hill and was eased.

R.P. Whelan, rider of Jackmel trained by Matthew J. Smith, reported to the Clerk of Scales that his mount lost both front shoes.

The Irish Horseracing Regulatory Board Veterinary Officer examined Bien Chase, trained by Adrian McAllister, at the request of the Stewards and reported the animal to be slightly lame post race.

Another day another winner for leading apprentice Gavin Ryan who steered Danger Money home in the extended mile and a half maiden at Tipperary.

Ger O'Leary's Real Force put in a professional display to land the median auction race in Tipperary at 5/2.