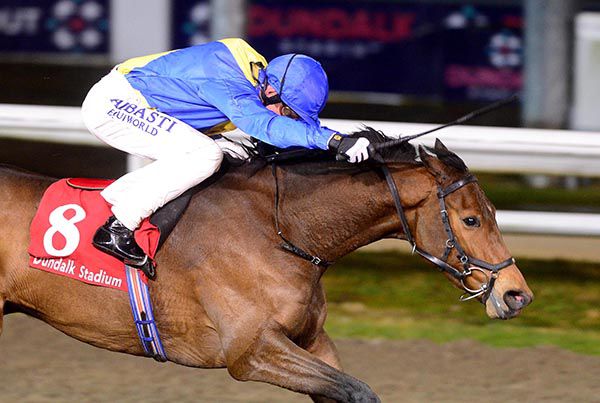 For-sale Bashful Boy got off the mark at the fifth attempt at Dundalk today as the Johnny Feane trained three year old landed the 1m4f Christmas Party Nights At Dundalk Maiden under jockey Kevin Manning.

The son of Magician finished second on his debut at today's venue 12 days ago and today proved three parts of a length too strong for runner-up Narynkol.

Afterwards trainer Feane said “I thought he was a bit far back early but Kevin said rather than be caught four wide he’d drop him in.

“He showed a good turn of foot and stayed out the trip well. He ran a cracker here the last day. He jumps hurdles and is for sale.

“There is a strong wind across the track but he was genuine and hit the line well.”

Eileendover took her unbeaten record to three with a hugely impressive victory in the Listed bumper at Market Rasen.

A third winner of the day for Gordon Elliott, and a second for owners Robcour, arrived in the finale at Fairyhouse as Gerri Colombe (8/13) absolutely blitzed his rivals by twenty four lengths and more.

Enjoy the word as Murphy puts 1st winner on the board