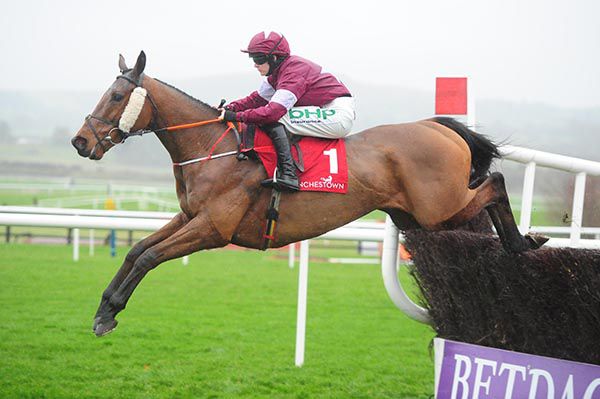 Judgement Day, under Rachael Blackmore, completed a four-timer over fences in the Betdaq Rated Novice Chase at Punchestown today as the Henry De Bromhead trained runner also completed a treble on the day for his owner Michael O'Leary's Gigginstown House Stud.

The son of Martaline probably doesn't appreciate what the fuss is about over fences, given he rarely sees a rival racing at a strong pace and today scorched to another all-the-way win when beating Kildorrery by two and a half lengths.

Following the race De Bromhead stated “any horse to win four on the bounce is good going. He started off in Kilbeggan and has won over three and back to two and a half; he’s a good tough horse.

“I couldn’t win with him over hurdles but he seems to have really improved for the fences.

“We did a couple of the early entries for Leopardstown and we put him in the Paddy Power Handicap Chase and the three-mile novice chase and I’d say we’ll aim for something there at Christmas.”