Gamble in the bag from two out for Rocky's Silver 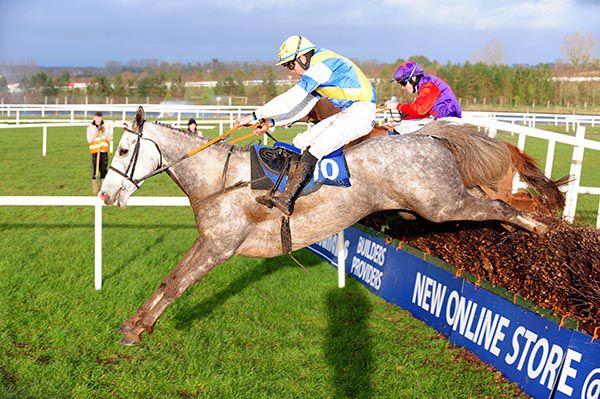 Rocky's Silver
© Photo Healy Racing
Backed into 7/2 favouritism from 11/2 on track, and from bigger earlier, Rocky's Silver landed the gamble by five and a half lengths in the Betdaq 2 percent Commission Exchange Handicap Chase at Punchestown.

The Conor Orr-ridden victor came together with Frankly All Talk two out and that rival was soon on the ground.

It was quickly a matter of how far and Guided By You was the one to chase home but he was never threatening the James Dullea-trained grey, now four times a winner.

“He’s a great stlawart for the yard. He’s obviously better over fences and I’d imagine we will pick out something for him over Christmas time," said Dullea.

“The conditions suited perfect today. The deeper the ground and the further they go the better he is. Conor gets a great tune out of him and it’s great for the owners Margaret and David Kiely.

“He’s won around Limerick a couple of times and that would be the place for him.”

B. Hayes, rider of Halsafari trained by Michael J. Bowe, reported to the Clerk of Scales that his mount made several mistakes and was pulled up thereafter.

D.J. McInerney, rider of Spancil Hill trained by Michael J. McDonagh, reported to the Clerk of Scales that his mount hung left and jumped left throughout.

P.D. Kennedy, rider of Garrai Phaidin trained by Shane Ryder, reported to the Clerk of Scales that his mount was having its first run in a while and it got very tired.

D.J. O'Keeffe, rider of Robin De Roost trained by Thomas Gibney, reported to the Clerk of Scales that his mount did not handle todays going.

H. Morgan, rider of Kilbrew Gold trained by Henry de Bromhead, reported to the Clerk of Scales that his mount made a bad respiratory noise throughout.