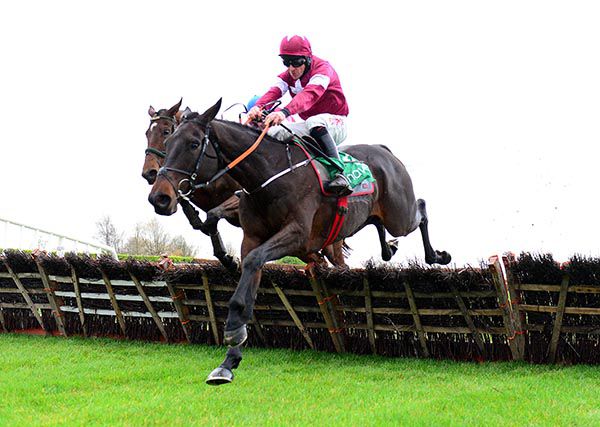 On a day when winning trainer Gordon Elliott 'drives for five' in the featured Troytown Chase, Gigginstown House Stud's quintet filled the first five positions in the opener at Proudstown Park, Defi Bleu leading them home in the www.navanracecourse.ie Maiden Hurdle.

It boiled down to a match between Elliott's Defi Bleu (Davy Russell) and Momus (Noel Meade and Sean Flanagan) from two out.

Momus (11/4) lost little in defeat but Defi Bleu (4/6) ultimately proved superior by two and three parts of a length.

“He’s a horse for next year to go chasing and I’d say he probably even wants three miles at this stage of his life. The further he went the better he got, and he jumped well," reflected Elliott in the aftermath.

S.W. Flanagan, rider of Momus trained by Noel Meade, reported to the Clerk of Scales that his mount burst a blood vessel.

The Irish Horseracing Regulatory Board Veterinary Officer examined Momus, trained by Noel Meade, at the request of the Stewards and reported the animal to have blood at the nose following exercised induced pulmonary haemorrhage.

P.Cluskey, trainer of Knockatoo Hill, reported to the Clerk of Scales that his charge scoped with mucus post race.