Goodnightngodbless with two races to go 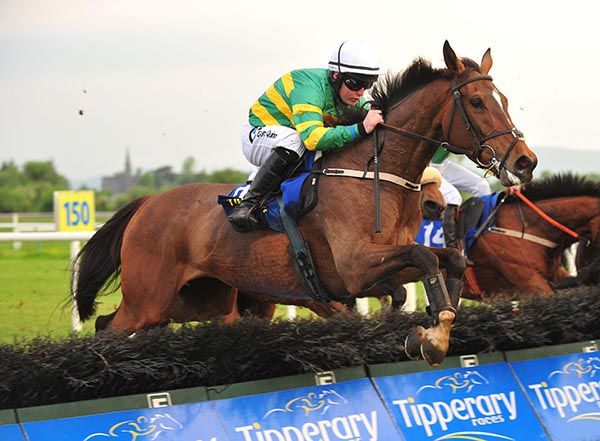 Gold Seal couldn't get it done as market-leader when second in the curtain raiser but there was a J P McManus winner later with Goodnightngodbless (16/1) prevailing in the Tipperary Races On Twitter Handicap Hurdle.

James Motherway trains and Luke Dempsey rode the successful Yeats mare and in a six to one the field heat the finish was dominated by outsiders.

Another five-year-old mare was the one to give Goodnightngodbless most to do, but Joseph O'Brien's Maifitz's Madonna (25/1) eventually had to give way by two and a half lengths.

"It is great to see her get her head in front as she has been disappointing and the penny just wasn't dropping with her. We ran her over 2m4f the last day and I felt she was staying on a bit and decided to step up to three miles," revealed Motherway.

"On her form she surprised me but she works ok at home and if anything she can be lazy. She minds herself a bit and Luke gave her a great ride. She wouldn't want the ground too quick and if it goes fast she'll get a break."

An extra special element to this success for McManus was the fact that Goodnightngodbless was home-bred by his wife Noreen.

The McManus family again gave their backing recently to the Con and Annie Kirby Memorial Stake in memory of Noreen's parents at Limerick greyhound stadium.

An event which also benefits GAA in the county, this year's event was hugely successful and the victorious greyhound Droopys Davy is likely to contend strongly for the Irish Derby this year.

The Irish Horseracing Regulatory Board Veterinary Officer examined Arch Stanton, trained by Noel Meade, at the request of the Stewards and reported the animal to have lost a right front shoe, otherwise was post race normal.

A.E. Lynch, rider of Le Braye trained by Gavin Cromwell, reported to the Clerk of Scales that his mount was pulled up after making a bad mistake.

B. Browne, rider of Capture The Drama trained by Aengus King, reported to the Clerk of Scales that his mount was pulled up having choked in running.

The Stewards requested a report from J.Motherway, trainer, as to the apparent improvement in form of Goodnightngodbless, placed first, as compared with its recent form.

The trainer reported that his charge did not handle the tacky ground at Tipperary and previously at Limerick the filly was ridden close to the pace but appeared to resent the lack of light in a bunched field of runners.

Today she was stepped up in trip to 3 miles and was ridden wide to allow her more daylight. In his opinion these were the contributing factors to her improved performance.

Having considered the evidence the Stewards noted the content of the report.