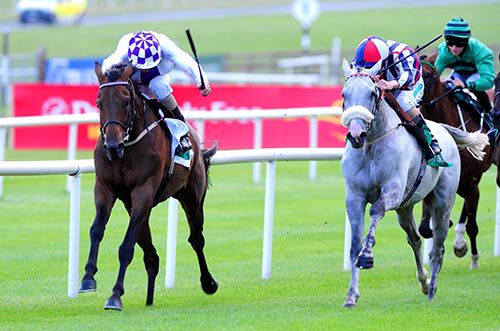 Chance To Dance, left
© Photo Healy Racing
Gowran plays host to a Flat card on Tuesday with the Sweet Sundays Racing & Dining From 22 Euro Handicap the feature race on the programme.

Chance To Dance for Jim Bolger and Red Rocks Point for Aidan O'Brien are the stand-out names in this contest over a mile and one.

The former is a progressive sort and after winning the valuable Cork Derby he followed up on Friday at the Curragh (carries a 5lb penalty for that success).

Red Rocks Point has won his first two starts and after scoring over the course and distance recently he will be well fancied to make it three in-a-row now.

Eighteen Summers finished just half a length behind Chance To Dance in the Cork Derby and he also looks to have solid claims, while Northern Rocked, Hes Our Music, Sophie's World and Dynamite Dixie complete the line-up.

Artistic Integrity was not beaten far on his handicap debut at Cork and is a leading contender, while Longfield Lad, Right First and handicap debutants Elusive Ice and Halul are others to consider.

The Hens & Stags Silver Package From 19 Euro Apprentice Handicap, also sees nine go to post and it too looks a wide-open affair.

Hilary has some solid form to her name and she should give a good account of herself while The Home Ruler, Flaring Forth (first-time cheekpieces) and Enough Is Enough all look to have solid claims.

Wildcat Kitten, Caliso Bay and Punch Bag look the three to focus on in the remaining handicap on the card, the Gowran Park Golf Club Handicap.

The Dermot Weld-trained Wildcat Kitten had a far from clear passage when finishing fifth on his handicap debut at Navan recently and can be expected to go close now.

After a string of placed efforts Caliso Bay finally got off the mark at Dundalk on her last start and she is an obvious contender, while Punch Bag has some decent form to his name and he too cannot be ruled out.

Highland Reel ran a fine race to finish second on his debut at Leopardstown recently and he appears the one to side with in the opening contest on the card, the Irish Stallion Farms EBF 2yo Maiden - a race his trainer Aidan O'Brien has won for the last six years. Jim Bolger's Hall Of Fame might give him something to think about as a full-brother to the high-class Parish Hall.

Angel Of Joy was just beaten at Roscommon on his last start and is fitted with cheekpieces for the first time now in the Go Racing In The South East Maiden.

Muileata was also just denied on her last start at Cork and she is sure to make her presence felt while the Weld newcomer Le Prix Du Saint is another to consider.

The Irish Stallion Farms EBF Fillies Maiden rounds off events at the Co Kilkenny venue with nine again going to post (the fifth nine-runner contest on the card).

The Shay Barry trained Mozetta ran a cracker on her debut at Dundalk in May and she is sure to prove popular with punters while Leaf for David Wachman and Weld's newcomer Scholarly are two others to consider.