Gowran brace for Murtagh as Fire sparks on debut for yard 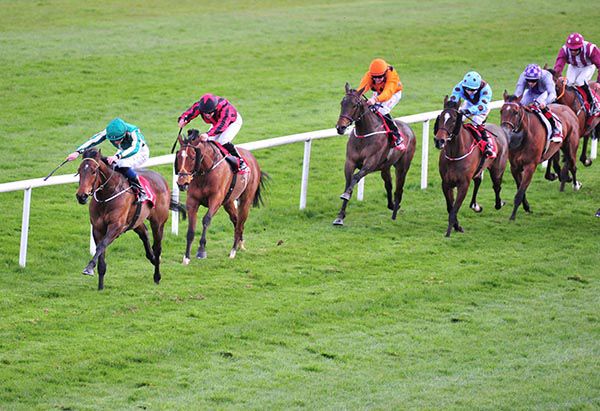 On his first start for the yard Ottawa Fire brought up a Gowran double for Johnny Murtagh, both this fellow and earlier winner Create Belief steered home by stable jockey Ben Coen.

Former Eddie Linehan runner Ottawa Fire went off a strong 2/1 favourite in the Johnny Murtagh Racing colours, and he delivered by two and a quarter lengths from No Way Jack in the Xenon Security Handicap.

Murtagh’s wife Orla reflected in the aftermath, following on from the win of her own Create Belief in the opener: “It's one for me and one for you. He won't let me have my day of glory!”

She further explained: “This horse came from Eddie Linehan, our apprentice Jamie Powell was riding him and said to us 'I think you should have him' so we got him and I think he's nice now.

“He's going to pay his way. He did the job very well and I was pleasantly surprised. At the two pole he stretched out well and won his race.

“He's a fine big horse by Anjaal, we had one by the sire last year in Aztec Parade so the romance was there.

“We looked at him and liked him, he stands up well.”

This was certainly a nice beginning both in handicap company and on the grass for Ottawa Fire.

The Stewards informed Edward Lynam, trainer, that Red Ball Of Fire, would have to be recertified before being declared to run from stalls again.

The Stewards reviewed an incident in the closing stages involving Ottawa Fire, ridden by B.M. Coen, placed first and Gold Allure, ridden by W.T. Byrne, unplaced, where it appeared that Ottawa Fire crossed Gold Allure. Having viewed the recording of the race and considered the matter, the Stewards were satisfied that no further action was warranted.