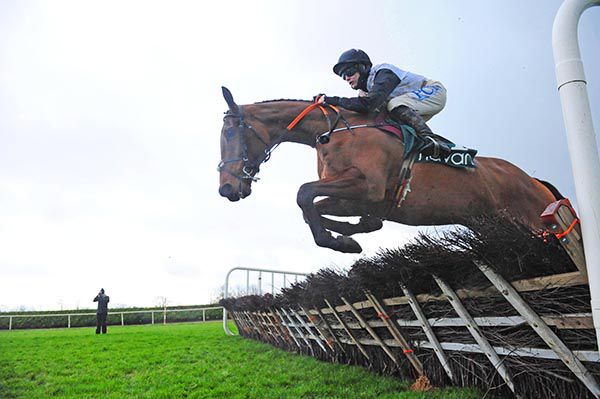 Henry de Bromhead plans to let Bob Olinger “do the talking” in the Lawlor’s Of Naas Novice Hurdle tomorrow.

Impressive in winning a point-to-point and a Gowran Park bumper last season, Bob Olinger made a promising start to his hurdling career when pushing last season’s Champion Bumper winner Ferny Hollow all the way in November.

The Sholokhov gelding duly went one better at prohibitive odds when stepped up two and a half miles at Navan last month, and will bid to follow up at the top level in Wednesday’s rescheduled Grade One.

“We’ll let him do the talking and see. He works really well, and we like him a lot, so fingers crossed he’ll do it on the track,” de Bromhead told Sky Sports Racing last week.

“We’ll get (this race) out of the way and we’ll know more then. He won his point-to-point and looked good at Navan the other day.

“He’s got a lot of pace as well, though. We’ll probably enter him for the three novice hurdles at Cheltenham and see nearer the time, but in my mind it will be either the Supreme or the Ballymore, as opposed to the Albert Bartlett.”

Willie Mullins relies on Blue Lord in a bid to add to his record haul of eight victories in the Grade One contest.

The French import looked a high-class recruit when winning on his Irish debut at Punchestown, and connections are optimistic that he can prove his worth in Grade One company.

Patrick Mullins, assistant to his father, said: “We were very impressed with Blue Lord in Punchestown. We think there’s a lot of improvement to come from him.

“He’s a horse who will jump a fence in time, but we think he is up to Grade One level, and this will tell us more.

“He came to us very well-schooled and he has always jumped well at ours.

“It’s a big step up, but that’s the way the programme is in Ireland. You’re only taking on horses with one or two more runs, so that’s not a major worry.”

Ashdale Bob and Crosshill give Jessica Harrington a strong hand.

Having claimed Grade Two honours in the Navan Novice Hurdle just over three weeks ago, Ashdale Bob arguably sets the standard here — while stablemate Crosshill won by 11 lengths on his hurdling bow before at Punchestown before chasing home Power Of Pause at the same venue.

“Ashdale Bob won the last day in Navan, and we’ve been very happy with him,” said Harrington’s daughter and assistant, Kate.

“Crosshill was very impressive over two and a half miles when winning his maiden hurdle, and that form has worked out well. We dropped back to two miles the last day, and I think we got the tactics wrong on that occasion.

“The step back up in trip will definitely suit.”

He told Betfair: “Wide Receiver is rated 130, but I think he is better than his rating suggests — and his form so far this season is good.

“His second to Ashdale Bob in a Navan maiden hurdle looks like a very good run in hindsight, and I was delighted with his effort at Leopardstown over Christmas when he won a maiden hurdle in good style — I could see him running a big race.

“In truth Ragnar Lodbrok faces a stiff enough task here. But he’s in good form, and I think if he can put together a reasonable round of jumping, he could give a good account of himself.”

Gavin Cromwell’s Gabynako and the Noel Meade-trained Flanking Maneuver, who won a Fairyhouse maiden hurdle less than a fortnight ago, are the other hopefuls.

Meade said: “It’s a Grade One race and a big jump up from a maiden, but we like the horse and said we’d have a rattle at it.

“Putting the race back three days is a help, and he took his maiden race win really well.

“He actually never lost a pound from one day to the next, and that was part of the reason that we decided to run. He lost no weight at all.”