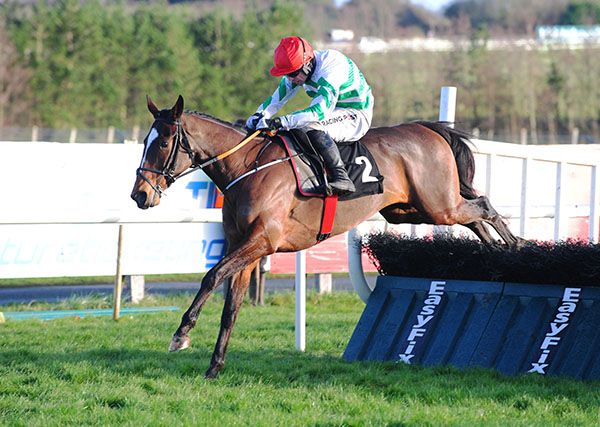 Grand Roi made some return on a sizeable investment by connections when taking the featured Grant Thornton Hurdle in good style at Limerick this afternoon.

Noel and Valerie Moran splashed out 400,000 pounds for the former Nicky Henderson-trained son of Spanish Moon at Doncaster in July.

The four-year-old was taking on some useful types when third to Beacon Edge and Minella Melody on his first start for Gordon Elliott at Galway in October and appreciated the step back in trip here.

He made virtually all under Denis O’Regan and, after drawing clear along with Indiana Jones inside the final half a mile, was travelling ominously well before the penultimate flight.

The easy to back 6/1 chance soon put the issue beyond doubt and stretched clear from before the last to score by eight lengths.

Wolf Prince stayed on late to just deny Indiana Jones the runner-up spot, while evens favourite Galopin Des Champs proved a bitter disappointment and was pulled up before the second last.

O’Regan said, “His jumping was superb on that ground. He travelled beautifully and has the makings of a very nice horse for a four-year-old.

“I reckoned he ran better than the form suggested in Galway over 2m5f and coming back to two miles here we could pop him out and use his jumping.

“He’s obviously taken a little time to get accustomed to Gordon Elliott’s stable and he seems a nice horse.”