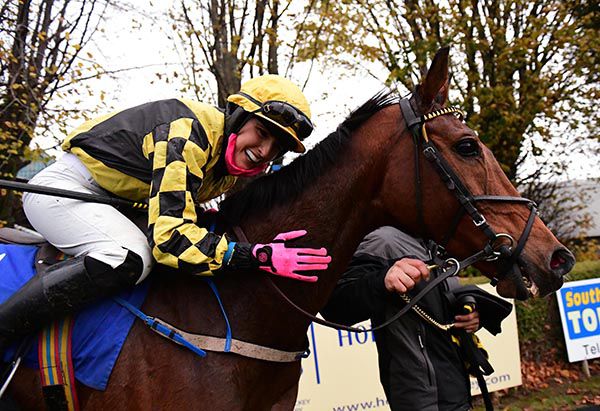 It may have been the Clonmel Handicap Chase with the topweight rated 112 but Aileen O’Sullivan celebrated as if it was the Grand National as she rode her first racecourse winner on 28/1 chance American Image.

The 80-rated maiden jumped well close to the pace and, despite having raced keenly throughout, kept pulling out a bit more for his rider in the home straight to pass the post half a length in front of Cluan Dara (9/1).

Bellgrove (22/1) was third with the fourth home Fag An Bealach, sent off the 3/1 favourite, looking in need of further as she stayed on into fourth.

The winner has done a lot of his racing in point-to-points but did finish second under this rider at Tramore in August. He’s trained by Michael Millar in Co. Antrim who was amongst the winners at Sligo last week with Lady Of The Sea.

The jubilant winning rider, who’s from near Navan and works in a bank as her ‘day job’, said: “I'm over the moon and am so proud of that little horse! We call him The Nutty Man at home and he is an absolute gem and he gave it all.

"I'm so delighted for my boyfriend Neil (Gault) who has done every bit of work with him and he helps Michael Millar train the horses. I am absolutely thrilled for them both and wouldn't be here today without them.

"I've had winners in point-to-points but that's my first on the track and honest to God I thought there was another lap to go!

"He absolutely jumped like a buck and he rallied to the line and I can't believe I won it. I was expecting to tip around and see how he runs but they had him in such good order."