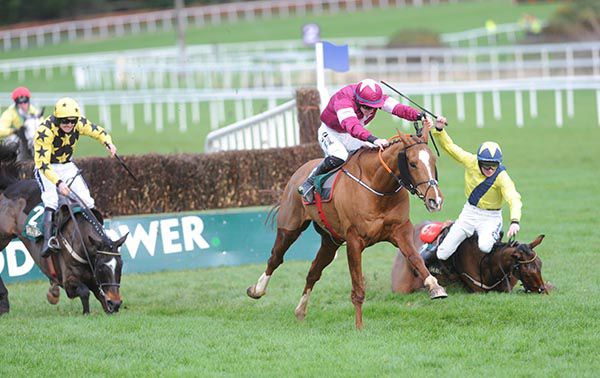 Gun Digger, runner-up to Chris’s Dream at Navan earlier this month, went one better in a dramatic renewal of the Ballymaloe Foods Beginners Chase at Leopardstown.

Borderline Chatho had put in a superb round of jumping from the front but was joined by the winner when falling at the last.

The 9/4 favourite Bacardys was patiently ridden by Ruby Walsh and had made significant progress to challenge when also falling independently at the final fence.

This left Jack Kennedy’s mount well clear and the 3/1 chance had 18 lengths to spare at the line over Whisperinthebreeze, with Tower Bridge (soundly beaten when badly hampered at the last) a further 17 lengths back in third.

Winning trainer Gordon Elliott said, “He’s a big honest galloping horse and Jack gave him a great ride. I’d say we were a bit lucky as Ruby was after giving his horse a peach, and if he stood up it might have been a different story.

“He’s more of a three-mile horse than a two and a half miler.”