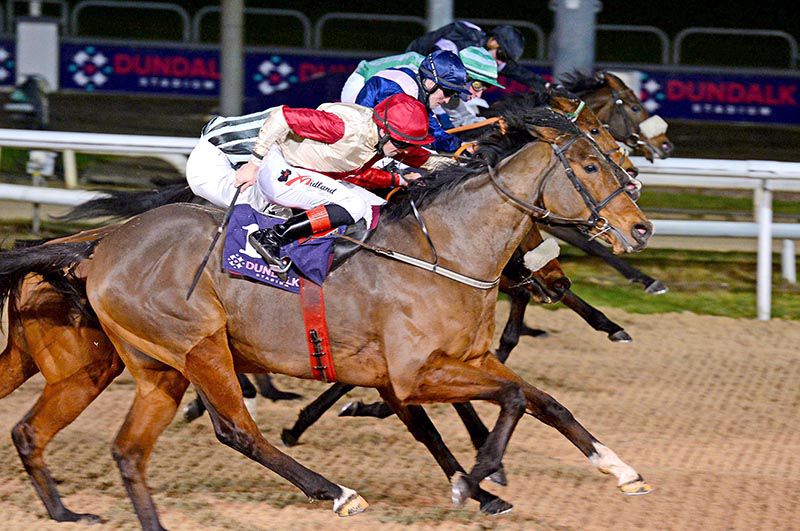 “It’s Whatharm, what a ride,” delivered the Kerry man as the Pat Flynn-trained winner, a big son of Canford Cliffs, was put in front with precision timing at the finish.

Distances of a neck, a head, a short head, and a short head between the first five, emphasise that Hoban and indeed Hannon were certainly on their game here.

Whatharm was waited with in the rear by the Mayo jockey, and Flynn’s charge took a keen hold.

Short of room under two furlongs out, and switched right, Whatharm was soon ridden.

Eighth a furlong out the 100/30 scorer stayed on strongly inside the final furlong, touching off Dark Magic.

“That was a very good performance carrying that weight,” said Hoban.

“He's a horse that likes to be fresh and he did it well. Stepping up in trip I had to ride him a bit different tonight. He was drawn wide so I had to drop in and pass them.

“The lads gave me loads of confidence and told me to ride him like the best horse in the race. They went hard and stopped, luckily we picked up on the outside and got his head in front where it mattered.

“We learned after running him back the last day a bit quick that he likes to be fresh. Hopefully Pat will be able to find another race for him over the next couple of weeks.”

The Stewards reviewed an incident shortly after leaving the stalls involving Point Reyes, ridden by C.D. Maxwell, Sagittarius Rising, ridden by Cillian McConnell, Legal Thriller, ridden by K.J. Manning, and Alhajjaj, ridden by Siobhan Rutledge, where it appeared several horses got tight for room. Having viewed the recording of the race, the Stewards were satisfied that no further action was warranted.