Hassett to Heffernan: 'go down slow and come home fast' 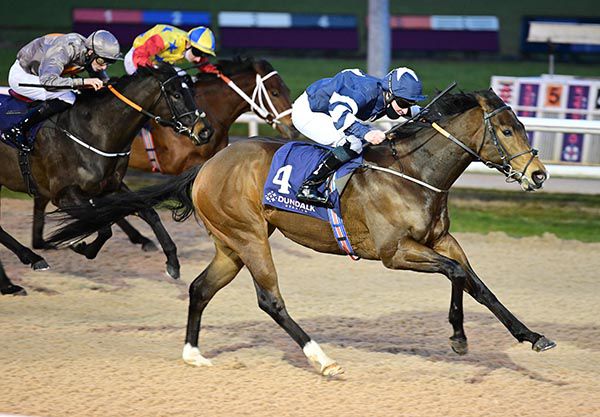 Well backed Harry's Hill (morning 8/1 — 7/2) gained a first win today at Dundalk as the gelding provided Seamus Heffernan with a first winner for trainer Martin Hassett in the Find Us On Facebook @dundalkstadium Handicap.

Heffernan, who occasionally rides work for Hassett, was always prominent on the son of Heeraat and in the end the pair quickened well for a length and a half win over Betrayed.

Coolmoore employee Hassett and his family worked around-the-clock clearing snow from their flood-lit gallops in recent weeks and today reported his yard is increasing from 12 stables to 18, following a recent spell of winners.

The Fethard based trainer added “I fancied him all week and it's great to have Seamie on your side; my instructions were to go down slow and come back fast!

“Wayne Lordan rode him here one day, and I was going to give him a break, but he said to keep him going. We were running him over six furlongs here because there were no five furlong races.

“We kept him going but didn't go hard on him over Christmas. Once we knew this race was coming we had him lined up.

“The owners bought him off Eoin McDonagh, who recommended him highly, in the first lockdown and he's their first horse. I told them to back him although they haven't seen him run yet; they are two electricians and a publican (collectively The Tipp Ramblers Partnership). He's a nice fun horse.”

Leopardstown is good to yielding for today’s eight race card with the weather set to remain mainly dry. Selective watering of the chase track took place after racing yesterday.

Tom Scudamore is determined to contain his excitement for the next five weeks after the “tremendous” performance which has given Cloth Cap a stranglehold on the Randox Grand National market.

Ryanair run for Kalashnikov will be 'last-minute decision'

Amy Murphy is planning a high-profile spring campaign for stable star Kalashnikov — although his participation in the Ryanair Chase is less likely than a trip to Aintree next month.

Meade to send small team to Cheltenham next week

Road To Respect in the Festival Plate Handicap Chase in 2017 was the most recent of Noel Meade’s five Cheltenham Festival winners and the Meath handler will have a select team to represent him at this year’s renewal.