Hats off to Milliner in Punchestown opener 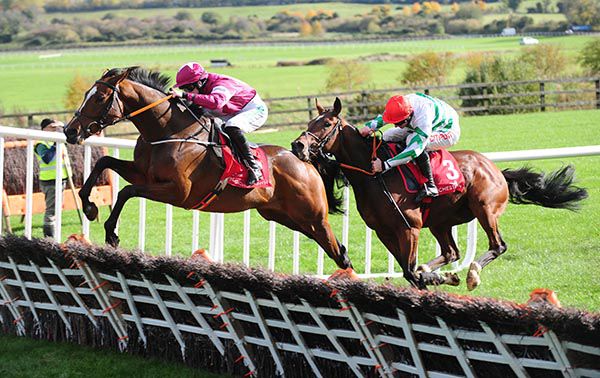 Milliner takes off at the last, hampering Batts Rock in the process
© Photo Healy Racing

Milliner made the perfect start to his career, as he took the opener at Punchestown this afternoon, the Punchestown Members Club Maiden Hurdle.

The Henry de Bromhead trained son of Gold Well was bought for E70,000 as a three-year-old, and is closely related to a Grade 2 winner in Carthalawn.

Sent off the 3/1 second favourite (from 4s on-course), the bay victor was settled in mid-division by Rachael Blackmore, and was fifth from halfway.

He took closer order to track the leaders approaching the third last, and hit the front before the final flight, keeping on well from there to score by four and a half lengths in the colours of Gigginstown House Stud.

Batts Rock, who was sent off the 4/6 favourite, was hampered by the winner (who jumped left) at the last, but had no more to offer on the run-in, and had to settle for second under Davy Russell for Gordon Elliott.

"I'm delighted with that. It was a super ride and he did it nicely in the end," said de Bromhead.

"I didn't think he'd be forward enough. Rachael said he was good, jumped great, and she seemed happy with him.

"I'd say we'll see how he is in the next few weeks and then look at a rated novice hurdle for him.

"I hope he'll get further in time. We were just getting him started there and he was really good, I must say."

* The Stewards enquired into an incident at the final hurdle involving Batts Rock, ridden by D.N. Russell, and Milliner, ridden by Rachael Blackmore, where it appeared Milliner crossed Batts Rock on the approach to the hurdle. Evidence was heard from the riders concerned. Having viewed the recording of the race and considered the evidence, the Stewards were of the opinion that the incident was caused by accidental interference and took no further action.

* C.J. Orr, rider of Baile An Roba trained by Francis Casey, reported to the Clerk of Scales that his mount's saddle slipped and he pulled up.

* A.W. Short, rider of Deedee Deecee trained by Miss Katy Brown, reported to the Clerk of Scales that his mount hung left.