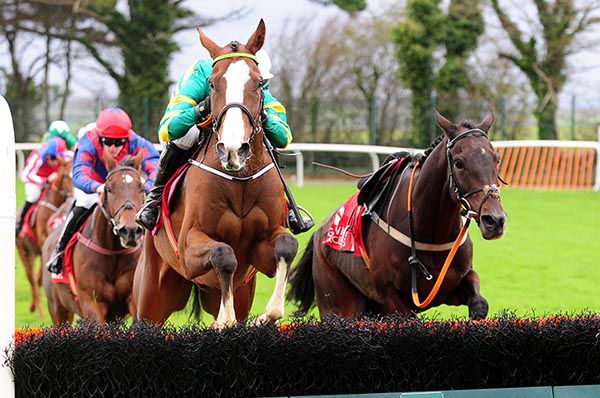 Hearts Are Trumps enjoyed a spin around Galway with a decisive victory in the extended two mile handicap hurdle.

From as big as 11/4 in the morning, the 5/4 favourite brought up plenty of bets when coasting home by three lengths.

His big white face was noted making progress to hit the front with three furlongs and two flights to negotiate.

He had Antimatter for company at that obstacle but soon had that rival off the bridle racing off the home turn.

Mark Walsh had plenty of horse under him and the pair were well in charge jumping the last.

Antimatter came in second at 10/1 with Ingleby Mackenzie third at 8/1, beaten eight lengths by the victor.

“We were looking forward to running him at Navan on a big galloping track but it was the right thing to pull him out there on the quick ground. It's lovely ground out there today.

“There are plenty of those type of races coming up but I don't think he's a real winter, deep-ground horse as he's fairly sharp.

“I'd say it wasn't a galloping enough track for him in Ballinrobe last time and although this isn't really a galloping track either, it's more of a staying track.

“He's bred for fences, as he's out of a full-sister to Denman and he's a very good jumper.”