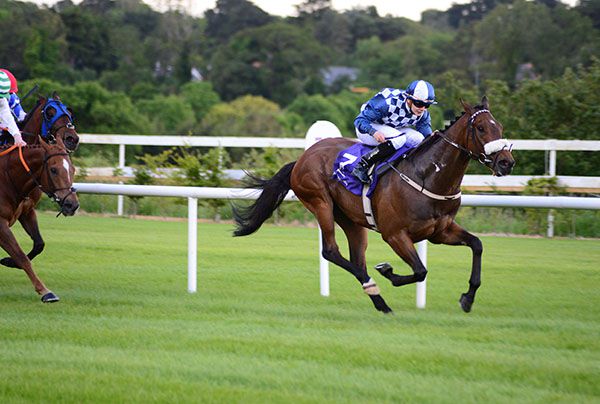 Still with Tracey Collins but now having his second outing for the Notary Syndicate, Beckwith Place built on a promising Curragh reappearance when third a month ago.

Here the 8/1 chance with Ronan Whelan up, chased the leaders, and he was fourth at the halfway stage.

The Mastercraftsman gelding progressed into second two furlongs out.

Ridden to lead a furlong and a half out, Beckwith Place kept on well in the final furlong to hold Crafty Madam by half a length.

Crafty Madam didn’t get a clear run a furlong and a half out and she finished off her race well on her initial outing for the Ken Condon team.

“We only have 12 in training and they have all been running exceptionally well, so to get one on the board is good," said Tracey Collins after her first winner since back in August.

“He was a weak horse last year and improved over the winter. He’d a good first run back at the Curragh and I’d have been disappointed if he didn’t do that this evening.

“He had a stone bruise and we had to take him out at Fairyhouse last week. He’s still a baby and only has eight runs under his belt. Hopefully he’ll improve from that again.

“This was Mr (Herb) Stanley’s horse and a new syndicate has come together to take him and another horse over. It’s great for them and is their first winner.”

S. Foley, rider of Earl Of Bunnacurry trained by Gavin Cromwell, reported to the Clerk of Scales that his mount got stopped in the straight.